$2.99 | Brand new ebook | Orphans No More: How to break free from a spirit of insignificance

FIRST: Have you read my latest articles in Charisma Magazine?

You can read them HERE. 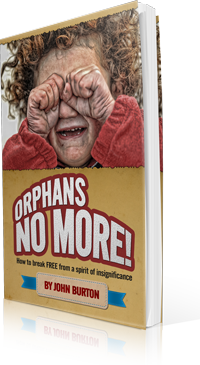 ORPHANS NO MORE! HOW TO BREAK FREE FROM A SPIRIT OF INSIGNIFICANCE

A powerful message of freedom also found in my book Carry Like Mary:

No more excuses: Don't let an orphan spirit keep you from fulfilling your destiny! Elizabeth had to be delivered from her barrenness to deliver John the Baptist and Mary had to miraculously overcome the fact she was a virgin to bring our Lord Jesus into the world. It's time for the issue of fatherlessness to, in the same way, be overcome by the power of God!

I agree that it's widely acknowledged today that there's a serious problem with fatherlessness and orphan spirits in the church and in the world.

I do not write these things to make you ashamed, but to admonish you as my beloved children. For though you have countless guides in Christ, you do not have many fathers. For I became your father in Christ Jesus through the gospel. I urge you, then, be imitators of me. 1 Corinthians 4:14-16

It's true that spiritual fathers are needed, and it's also true that sons and daughters must discover their true identities-and those identities are not dependent on whether fathers appear in their lives or not. It's much deeper than that.

The sins of the fathers are significant, and they impact the succeeding generations dramatically. The call is for every one of us as sons or daughters to break off generational destruction and align ourselves with Father God. If we don't, the devastation will continue. Children of God arise!

A Spirit of Insignificance is one of the most powerful messages of freedom you’ll ever hear! 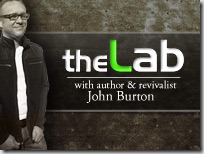 Tomorrow (Saturday) at 10am at theLab School of Fire in Madison Heights you are invited to join our students and staff for a day of freedom!

We’ll be in the auditorium for four hours of deep prayer, ministry and teaching on breaking free from a spirit of insignificance.

You can pay with credit card online at www.revivallab.com/payment or simply show up and pay with cash or check at the door!

theLab School of Fire makes three of its classes available for people to audit.

Along with tomorrow’s A Spirit of Insignificance, you can prepare to join us for Becoming Unoffendable and Six Enemies of Fulfilled Destiny.

All other classes and sessions are closed to the public.

THE NEXT SCHOOL OF FIRE

Start to prepare for the next session: Apr 28-Jul 21

You can apply TODAY at www.revivallab.com/apply!

Last night’s service was simply indescribable—freedom reigned as spirits of insignificance were broken off!

Man, I have to tell you—if you make a habit of skipping out on the services at Revival Church, change your habits! You are missing a lot!

God was moving in dramatic fashion all night last night! The prophetic was ramped up and lives were rocked! Aaron Crider brought us into a place of encounter through worship and I delivered a message that people are already requesting so they can listen again and share it with ministry teams and friends.

The sermon is now ready for you to stream or download!

Head on over to www.detroitrevivalchurch.com/teaching and listen to A Spirit of Insignificance.

Go to www.detroitrevivalchurch.com/thelab tonight and listen in OR call in and listen at (323) 679-0954.

Here’s the notes from last night’s teaching, A Spirit of Insignificance:

A Spirit of Insignificance

a. A massive mission requires a massive response

iii. Gathering and praying in the garden (vs. sleeping)

1. Joe Sazyc- The mosque was packed at 6am, and he went to his prayer meeting where there was one person.

2. The major issue I’m seeing right now is the lack of the prayer fueled corporate gatherings.

3. Exhortation- the churches must be full! A weak person’s simple prayer on a night like tonight can be what it takes to launch revival!

a. I’m calling the church of Detroit to be in position… we are declaring that we don’t participate based on what we get out of it… the church isn’t there to entertain us… we must work! We must understand the tactical needs… we need everybody in church all the time. The vision is huge, and we’re awaiting an army.

b. Pastor Loudermilk- we need you in church!

iv. This call to gather, the call to the 24/7 church is being fought against by the enemy incredibly.

1. My thought was that due to the hunger of revival in Detroit, it would be easy to sound the alarm and gather a desperate army.

2. However, the hunger is overshadowed by a variety of issues.

v. People are kept from the corporate mission for many reasons

4. An inability to look past personal struggles to focus on the city

a. The church is inundated with fixing people’s problems instead of the people coming together and fixing problems.

vi. Today I want to hit on the issue of insignificance

1. It’s common to feel that our participation, our attendance, our prayer, our response isn’t important.

2. We’ve discussed the definition of religion quite a bit.

3. A spirit of insignificance will cause us to believe that we have no hope of bringing anything to the mission, so we default on participating based on what the mission can bring to us.

i. We see the enemy scattering the church.

ii. The power of unity and corporate advance was diluted to the point of having no effect as they separated and hid in caves.

b. Judges 6:3-6 (ESV) 3 For whenever the Israelites planted crops, the Midianites and the Amalekites and the people of the East would come up against them. 4 They would encamp against them and devour the produce of the land, as far as Gaza, and leave no sustenance in Israel and no sheep or ox or donkey. 5 For they would come up with their livestock and their tents; they would come like locusts in number—both they and their camels could not be counted—so that they laid waste the land as they came in. 6 And Israel was brought very low because of Midian…

i. Step one: In the time of desperation, it’s time to cry out.

1. Verse 6: And the people of Israel cried out for help to the LORD.

c. Judges 6:7-8 (ESV) 7 When the people of Israel cried out to the LORD on account of the Midianites, 8 the LORD sent a prophet to the people of Israel. And he said to them, “Thus says the LORD, the God of Israel: I led you up from Egypt and brought you out of the house of bondage.

i. Step two: God sends a prophet with instructions and encouragement.

d. Judges 6:9-10 (ESV) 9 And I delivered you from the hand of the Egyptians and from the hand of all who oppressed you, and drove them out before you and gave you their land. 10 And I said to you, ‘I am the LORD your God; you shall not fear the gods of the Amorites in whose land you dwell.’ But you have not obeyed my voice.”

e. Judges 6:11-13 (ESV) 11 Now the angel of the LORD came and sat under the terebinth at Ophrah, which belonged to Joash the Abiezrite, while his son Gideon was beating out wheat in the winepress to hide it from the Midianites. 12 And the angel of the LORD appeared to him and said to him, “The LORD is with you, O mighty man of valor.” 13 And Gideon said to him, “Please, sir, if the LORD is with us, why then has all this happened to us? And where are all his wonderful deeds that our fathers recounted to us, saying, ‘Did not the LORD bring us up from Egypt?’ But now the LORD has forsaken us and given us into the hand of Midian.”

i. God spoke to Gideon based on his true identity, not his perceived identity.

i. Those who perceive themselves to be insignificant are but a moment away from initiating a move of God that will be felt throughout the city!

ii. Moses felt insignificant… he stammered. One of the greatest stories in history was in front of him.

iii. Gideon remembered that God delivered them from Egypt… what he didn’t realize was that someone with the same insecurities as himself was the deliverer.

h. As the story unfolds we see God continue to advance his plans through seemingly insignificant means.

i. The least and the weakest is leading 1% of the army available to him.

j. Judges 7:15-18 (ESV) 15 As soon as Gideon heard the telling of the dream and its interpretation, he worshiped. And he returned to the camp of Israel and said, “Arise, for the LORD has given the host of Midian into your hand.” 16 And he divided the 300 men into three companies and put trumpets into the hands of all of them and empty jars, with torches inside the jars. 17 And he said to them, “Look at me, and do likewise. When I come to the outskirts of the camp, do as I do. 18 When I blow the trumpet, I and all who are with me, then blow the trumpets also on every side of all the camp and shout, ‘For the LORD and for Gideon.’ ”

i. It makes no sense!

k. Judges 7:19-22 (ESV) 19 So Gideon and the hundred men who were with him came to the outskirts of the camp at the beginning of the middle watch, when they had just set the watch. And they blew the trumpets and smashed the jars that were in their hands. 20 Then the three companies blew the trumpets and broke the jars. They held in their left hands the torches, and in their right hands the trumpets to blow. And they cried out, “A sword for the LORD and for Gideon!” 21 Every man stood in his place around the camp, and all the army ran. They cried out and fled. 22 When they blew the 300 trumpets, the LORD set every man’s sword against his comrade and against all the army. And the army fled…

i. You are significant!

ii. A small army is significant!

iii. A strategy of prayer is significant!