The enemy is looking for a back door into the church—through worship teams. 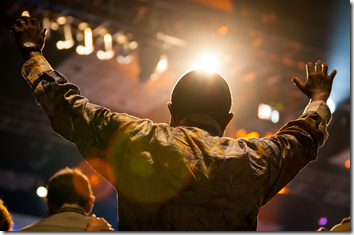 I’ll never forget an extremely powerful and disturbing experience I had when praying in a church many years ago.

Both in Colorado Springs and Detroit I had the privilege of giving some leadership to remarkable prayer movements. Every Friday from 10pm until midnight we would gather hungry people from the region to pray in tongues. We’d spread out and pray boldly through the sanctuary, on the platform, in classrooms and outside. The roar of intercession was intense.

The focus each week was to bless the ministry and to partner with them in their mission. At times we’d have over 200 people squeezing into a property designed for 30! I was always thrilled when the pastor and his core team would show up in force. I was always confused when a secretary or janitor would unlock the door for us and then disappear into another part of the property.

The night of the experience I am about to share with you, from what I can remember, included nobody from the host church. However, scores of fiery zealots from all over the region were praying with passion.

In the midst of pacing and praying, one of the other leaders called me over. He said, “John, go walk through the baptismal.” I was perplexed and asked why. He encouraged me to just do it. The baptismal was empty and positioned behind the platform. While praying in the Spirit, I walked down into the vessel designed for introducing people into a life-altering eternity with Jesus. I gagged. I felt sick. The swirl of demons in that very spot was so overwhelming that I was shocked.  I Slowly walked through, praying and attempting to analyze what was happening in the invisible realm. I emerged on the other side and approached my friend. With my eyes wide open and shock on my face, I said, “What in the world was that?” He smiled (not a happy smile, but one that indicated bewilderment) and said, “I told you something was going on there.”

We didn’t share the experience with anybody there and simply prayed and took authority.

Very shortly after that night, it was discovered that the worship leader of that church had been involved in homosexual relationships. The memory of my walk through that baptismal tank caused me to grieve.

Its expected for today’s righteous pastors and leaders to take a stand and to oppose all wickedness, including homosexuality. Sadly, fewer and fewer are, but that’s an article for another day. Today we need to talk about the responsibility of worship leaders and those on worship teams to stand for truth.

It’s quite uncommon to hear from worship leaders regarding their doctrinal positions. They are a vulnerable vehicle for the enemy to deliver his next assault in the church through.

On one of the largest stages in the nation, Carrie Underwood was invited to participate in the latest Passion Conference. She belted out Amazing Grace along side Crowder in front of thousands of worshipers. What many didn’t realize is Carrie is a supporter of homosexual rights.

From a recent Charisma News article:

“The controversy is why would Louie Giglio put someone in front of millennials—who are struggling with this issue—who is basically saying that the Bible is not true in what it says about homosexuality,” American Family Association Ed Vitagliano says.

“[There is a] growing strain within the evangelical community that is denying the truth of Scripture,” he continued.

As Underwood told The Independent in 2012:

“Our church is gay friendly,” she explains. “Above all, God wanted us to love others. It's not about setting rules, or ‘everyone has to be like me.' No. We're all different. That's what makes us special. We have to love each other and get on with each other. It's not up to me to judge anybody.”

“As a married person myself, I don’t know what it’s like to be told I can’t marry somebody I love, and want to marry. I can’t imagine how that must feel. I definitely think we should all have the right to love, and love publicly, the people that we want to love.”

ETERNITY IS AT STAKE

This isn’t about debating about differing theological viewpoints. This argument isn’t even an argument. It’s settled. The Bible is clear. Eternity is at risk.

It goes down like vinegar, but the truth remains, those who support homosexuality can’t presume to be saved. They will experience horrifying torment in Hell forever. We have to let that sink in.

If we are allowing worship leaders to minister in the name of God while endorsing homosexuality or other wickedness not only are we aligning with extremely powerful demonic spirits at they ramp up their assault on millions, we are stepping aside, allowing people to be put at extreme risk of Hell.

Entire churches risk having Ichabod posted above the doorposts because of leaders, including worship leaders, who are inviting unholy spirits to take residence through their alliance with them. Simply, when we agree with a doctrine of demons, we become a partner with them. We align ourselves with them and give their evil war power and strength.

THIS IS A PROPHETIC MESSAGE FOR TODAY

I sense strongly that God is attempting to awaken worship leaders who are toying with spiritual death, and he is also attempting to strengthen his holy army of worship warriors. He’s looking for those anointed men and women of God who are partnering with him in holiness and who are taking their call to lead people in worship of a fearful, holy God seriously and soberly.

I don’t know about you, but it is important to me to know just what a worship leader believes. I’m often troubled with the doctrine that’s coming through in the lyrics of much of today’s popular worship music. However, this prophetic call takes us down a very specific path. We have to understand the enemy is attempting to normalize homosexuality in churches. What better strategy than to anoint those who are leading people into a spiritual/emotional place. I’ve heard people support homosexuality by saying, “Don’t you feel God’s presence when we worship? We consider that his endorsement of our position on homosexuality.”

Respectfully and with great honor, send this message to your worship leader and your pastor. Pray for them. Collectively lets encourage worship leaders to make their positions on morality and biblical truth clear.

The church, revival and eternity are all at risk.

FIRST- I’m almost at my limit of 5,000 Facebook friends, so I’m moving over to a Facebook page. Head on over to www.facebook.com/johnburtonministries and connect!

Whatever you do, don’t underestimate what God can do this Sunday evening at Revival Church. Michele Perry of Iris Ministries will be imparting supernatural life to all who are thirsty. Let me say it again—don’t miss this rare and special opportunity!

I know there’s a lot going on in life, but it kinda, just a little bit, breaks my heart knowing that most people in Detroit are usually not invested in a ministry anywhere on Sunday evenings. Nearly an ENTIRE ARMY is out of commission!

Yep, you heard me right… we have a HUGE window of opportunity where most everybody in Detroit is AVAILABLE! We must be together and advance the Kingdom of God with passion!

Those people, along with the rest of us, have a life-altering chance to encounter God on Sunday night with Michele Perry. Plus, the phenomenal opportunity to do so every Sunday night is there as we at Revival Church contend for a regional outpouring. As a strategic and prophetic regional revival center, it’s imperative that we connect with other regional churches on an on going basis.

Wouldn’t it be amazing if several Senior Pastors, intercessors, worship leaders, evangelists and others were also on staff with us at Revival Church? What a unity driving, paradigm wrecking idea that is!

What if some of us at Revival Church were on staff at other ministries in the Detroit area?

As we work together, every week, with clear strategy and clear city church responsibilities, we’ll get this job done!