Detroit City Strategy: The most important event of the week is NOT our Sunday service. 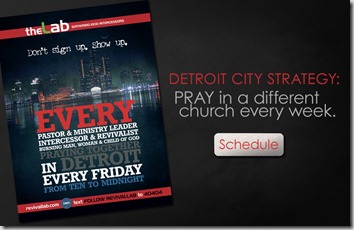 As much as I LOVE Sunday night services at Revival Church (and, yes, I mean LOVE!), they are not the most important events of the week.

For those that are interested in city-wide revival, transformation and real unity there is no match for Friday night’s prayer events that travel the city of Detroit.

*Tonight is extremely special. After Catherine Mullins and Brian Simmons minister the fire of revival at The Crossing (the conference starts at 6:30pm), we’ll take over and continue in burning groans and cries of intercession!

Detroit: theLab Friday Prayer Events—A movement unlike any other

theLab is an apostolic and prophetic movement in the Detroit region that is working WONDERS. In fact, it has been so powerful that a school of ministry has been birthed out of it! theLab School of Fire is shocking and rocking a lot of zealous, emerging history makers!

Since January, 2011 theLab has been in around 50 different churches in the Detroit region. That means that 50 churches have been rocked by the life and fire of the Holy Spirit in unusual fashion.

The grace that’s on this movement is remarkable. Astonishing. The call is for EVERY pastor, leader, intercessor, revivalist and burning man and woman of God in Detroit to gather together every Friday night from 10pm-midnight. This is a city movement of fire for the entire city church of Detroit. I’m sounding the alarm. Who will respond?

Joel 1:14 – The Message® (MSG)
Declare a holy fast, call a special meeting, get the leaders together, Round up everyone in the country. Get them into God’s Sanctuary for serious prayer to God.

What racial problems in Detroit?

Since before I moved to Detroit I’ve heard about the severe racial tension that plagues this region.

Since a growing team of burning revivalists and I have been traveling the city every Friday night for over a year, both in urban and suburban churches, my testimony is:

I sense no racial tension whatsoever. None.

We pray in fire together. We love God together. Black. White. There is unity. There is no division. NONE.

And, it’s extremely easy. No working things out. No focus on past racial violations. Just freedom.

I know what you are probably thinking. I’m not seeing all of the other churches and ministries that are steeped in division and racial strife.

I know they are out there, but the prophetic word is this:

They are off the radar.

The next move of God that is drawing very near in Detroit DOES NOT include them—unless they simply repent, pray, humble themselves and join the movement of revival in Detroit.

Repentance will put them right back on the radar of God’s city church mission in Detroit. It’s that easy.

I will make this as clear as I can—division, jealousy, bitterness and resistance in any form, whether it’s racial, theological, relational or otherwise will take us off the radar. We will miss the outpouring. The fear of the Lord should be striking every one of us right now.

Those who are divisive and resistant are simply being replaced by a fresh army of revivalists and a new city church of power in Detroit.

I believe the days of attempting to unite the old guard in Detroit is over. Seeking cohesion between the pastors here is an honorable mission, but that season is coming to an end as a willing remnant takes their place. This simply means that the mission is switching from reconciliation to advance. It’s time to take steps.

The good news is that at any time, those off the radar can willingly step right back onto it. It’s that easy. But, the pillar of fire is moving, so they better do it quickly.