What will it take for revival to land? What is standing in the way? 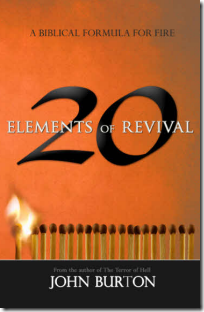 There are over 19,000 cities in America—and none of them are experiencing the biblically normal culture that revival would bring. Something is tragically wrong! Extreme, shocking and potentially offensive reformation is necessary.

To better help you take the pulse of your own life and your own city, I am suggesting some threats to revival. As we eliminate the threats, we’ll be steps closer to an outpouring. Some of what I’m sharing is from my book 20 Elements of Revival and some is from what I’m currently witnessing in my city of Detroit, Michigan.

First, consider this quote by Evan Roberts, the hero of the Welsh Revival, as he shares the simple formula for revival:

You’ll notice Evan’s formula for revival is addressed throughout the following points:

The local church—Yes, I know that’s a provocative statement, and I must state very clearly that I love the church and I love pastors—and honor their amazing devotion. However, the alarm must be sounded. If a regional call to action is muted by the over-saturated, over-protected local church calendar, the necessary strength to both initiate and then support revival on a regional level won’t be there. Additionally, if we allow jealousy, insecurity, offense or other tactics of the enemy to keep us and the people in our churches away from the regionally emphasized mission, revival will most certainly not arrive, and the grace to run our local churches won’t be there. It’s a lose-lose situation. It’s time that we as leaders intentionally monitor closely where the fire is burning in a region—and then cancel our lesser activities so we can lead the people there. We must see the mobile, regional, 24/7 church emerge.

A belief in fate—Many people tend to believe that they have little effect on whether revival breaks out or not. They may say things like, “Nothing will stop God if he wants to pour out in a region,” or “If God wants to bring revival, he will.” A belief in fate minimizes the radical importance of our participation. Additionally, the many prophecies that have been revealing God’s plans for an outpouring in Detroit are conditional. In order to see them come to pass, we must involve ourselves in the process. As Mike Bickle says, “Prophecy isn’t a guarantee, it’s an invitation.”

Taking a “wait and see” approach—Related to the above point, many are sitting back waiting to see if this current outpouring in Detroit is in fact a move of God. The problem? God’s moving is largely dependent on you and me! We have been instructed to tend to the fire, and in our unwitting arrogance we have reassigned that job back to God! We believe God is to do our job of keeping the fire burning when he explicitly requires us to do it. If we don’t build the fire, the fire will go out—even though God’s prophesied plans are to bring the fires of reformation to Detroit.

The scattering movement—We are in the end-times, and it’s clear in scripture that we must gather together even more during this historic season. Satan’s plans to overthrow God were well on track as the greatest movement of unity in history was advancing.  That unity gave strength to the building of a tower that would reach the heavens. God realized the threat and initiated ‘operation scattering’. The language was confused and they scattered all over the Earth. Now, Satan is using God’s own strategy against the most powerful governmental system on the planet—the Church. Instead of gathering in unity that would be strong enough to overthrow Satan’s kingdom, we are being scattered. We are not together. This is why stadiums will be critical in this next season. We must have the city church literally together, in the same place, consistently. Read more about the scattering movement in my article You are Not the Church. Remember, a key element of revival, which is emphasized by Evan Roberts, is daily meetings. Yes, it will be normal for people to be in church, together, under apostolic leadership most every day of the week.

A seeker-sensitive movement—I’ve often told the people in my church that I will never tone down the activity of the Holy Spirit out of respect of those less hungry. We need burning churches that result in people falling to their faces and crying “Holy!” when they walk through the door. It’s arrogance to presume that our human strategies are more potent than the supernatural capabilities of the Holy Spirit. When people are in desperate need they don’t look for Clark Kent, they are don’t want someone who looks just like them to come to their rescue. They need to experience the superpowers of the Burning Holy Spirit.

A lack of intercession—Evan Roberts declared that revival hinges on our obedience to pray and wait. The call in Detroit is for 1000 intercessors to gather together in the same place every Friday night as we release fire and cover this great mission. If we don’t respond, we probably don’t want the consuming fire of revival to come. We won’t be prepared for such a fearful burning.

Fear of loss—A key reason pastors don’t advance their churches into the experiential realm of encounter with God is that the risk of losing people, money and their reputation is high. It’s clear that a instituting a marginalized church culture is a much less risky option to develop a growing church in America. However, it’s also clear that  such a culture is void of power and miracles. The world isn’t looking for another man-made system to join. In fact, the world does a much better job of building humanistic kingdoms than the church does. We’ll only see revival when we have the guts to call people into the wilderness of extreme encounter where the Fire and the Cloud leads them into a supercharged adventure. Pastors, let’s be willing to lose people, lose our salaries, lose our reputations, to allow our local churches to close if necessary—for the sake of the advance of the regional, city church! Such a disposition will result in a greater grace on both the local and regional levels.

Unbelief—Evan Roberts reveals one of the elements of revival is simply to believe God’s promises. It’s stunning how little the church believes in the supernatural. Healing, freedom, power and abundant life are tragically rare. Its no wonder that people are avoiding the church today. We are a people who are living on the wrong side of the Ascension. In Acts 1, the disciples were waiting for Jesus to snap his fingers and work more wonders. They wanted him to establish his Kingdom. But Jesus gave them clear instructions that would shock them to their core. They weren’t to wait and hope for something to happen (hope deferred makes the heart sick)—they were to do it themselves! They transitioned from disciples on one side of the Ascension to apostles on the other. Now, they, as ‘sent ones’, were to believe and act. They were to be the answer to people’s impossible situations. They waited for the necessary power to change the world, and when they received the Holy Spirit, they went everywhere in fiery belief healing, delivering and preaching the Kingdom.

Seeking an enhanced life—People generally want God to make their current lives better. They want an enhancement, an upgrade. However, the demands of revival include the willingness to embrace a fire that won’t warm your flesh—it will consume your flesh. Evan Roberts called for people to gather—but not all people—only those who were willing to make a total surrender. Revival doesn’t enhance lives, it crushes them. If we attempt to advance with a semi-surrendered people, the fire simply will not fall.

A lack of immediate response—This is one reason why church schedules must be flexible. It’s also a reason why daily meetings are critical. When prophetic instruction is received, the entire region must know about it right away, and the people must respond. In Joshua 3, the instructions were clear, and everybody responded in unison. There’s no way to fulfill this mighty mission if we are only together one day a week (actually 2 hours a week!). There’s way too much work to be done! As an example, Mike Bickle recently called an urgent meeting. Most of the departments at IHOP in Kansas City were immediately closed and the people all gathered together to receive an urgent prophetic message. In Detroit, we must promote extreme alertness and flexibility so we can respond moment by moment to the demands of regional revival. If we are mostly focused on our local, personal ventures, we’ll stay disconnected from the greater, regional mission. The response won’t be what is necessary and revival will most likely never come.