A crisis is coming to the church…in fact, it’s the church who must initiate it. 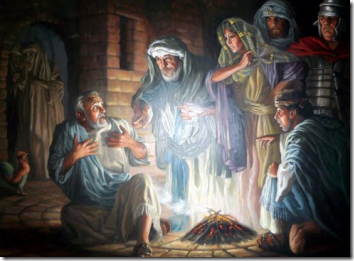 The cock is about to crow—where will you be when the crisis of the cross is reintroduced to the church?

Matthew 26:73-75 (ESV) 73 After a little while the bystanders came up and said to Peter, “Certainly you too are one of them, for your accent betrays you.” 74 Then he began to invoke a curse on himself and to swear, “I do not know the man.” And immediately the rooster crowed. 75 And Peter remembered the saying of Jesus, “Before the rooster crows, you will deny me three times.” And he went out and wept bitterly.

He invoked a curse on himself

From the Life Application Commentary: While Peter may have hoped to seem a natural part of the group by joining in the conversation, instead he revealed, by his speech, that he did not belong there. This was too much for Peter, so he decided to make the strongest denial he could think of by denying with an oath, “I don’t know the man.” Peter was swearing that he did not know Jesus and was invoking a curse on himself if his words were untrue. He was saying, in effect, “May God strike me dead if I am lying.”

Peter was running for his life. In the church today the prevailing focus is on our experience and the affirmation and protection of our lives and lifestyles. People go to church to enhance their lives. When their lives, or even their lifestyles, are threatened, people will begin to run for their lives. They will run to safety.

This clear and extreme denial of Christ will invoke a curse!

Jesus was so indignant about this type of reaction that he dealt with Peter in fierce fashion before this event even unfolded:

Matthew 16:21-23 (ESV) 21 From that time Jesus began to show his disciples that he must go to Jerusalem and suffer many things from the elders and chief priests and scribes, and be killed, and on the third day be raised. 22 And Peter took him aside and began to rebuke him, saying, “Far be it from you, Lord! This shall never happen to you.” 23 But he turned and said to Peter, “Get behind me, Satan! You are a hindrance to me. For you are not setting your mind on the things of God, but on the things of man.”

Peter denied the cross, and Jesus rebuked Satan who was working through Peter (who Jesus had just identified as the rock, the CHURCH!). He made the point clear: Peter was mindful of thing things of man and not the things of God. Jesus than said:

Matthew 16:24-25 (ESV) 24 Then Jesus told his disciples, “If anyone would come after me, let him deny himself and take up his cross and follow me. 25 For whoever would save his life will lose it, but whoever loses his life for my sake will find it.

A crisis of the cross

Apostles and prophets must step into their positions of authority and release a great crisis to the church!

This is a necessary crisis as it will result in the true, abundant life of multiplied millions. The offensive, bloody cross must return to the church—and now!

When Jesus was hailed as King at the Triumphal Entry, the masses converged. The focus was self. They wanted Jesus to save them, make their lives better. They were crying out, “Hosanna!” which means, “save us now!”

So, Jesus complied. The only way to save the ones he loved was to face death on the cross. Yet, the rooster crowed and the crowds scattered and turned on Jesus. His closest friends ran for their lives. One cursed himself in his denial. Another betrayed Jesus and hung himself.

Yes, it’s time not to snack on some bread and grape juice, but to eat his flesh and drink his blood.

When the cross is introduced in its full, bloody force again in the church, we will watch this drama unfold another time. People will flee from the church when focus changes from personal freedom to personal cost. Betrayal will skyrocket. Fear will grip those who haven’t surrendered all.

Where will you be when the cock crows?

The generations must come to the cross

Everybody ran for their lives but mom and son, Mary and John (along with Mary Magdalene) remained. The generations converged.

Luke 1:17 (NIV) 17 And he will go on before the Lord, in the spirit and power of Elijah, to turn the hearts of the fathers to their children and the disobedient to the wisdom of the righteous–to make ready a people prepared for the Lord."

Any movement that doesn’t take place at the cross is a false movement.

This is one reason I’m so troubled by some events, certain unity movements in a city, pastors meetings, etc. If a pastor isn’t fully ready to resign his mission, to lose his salary, to surrender his sheep, to shut his church down, I have little interest in meeting. The cross demands everything. When pastors of a city gather around the cross and don’t focus on personal gain, revival will be at hand. Yes, many will be offended, but the Harvest will flood in!

The false love and false grace doctrines must be exposed. These belief systems are causing Hell to continue to expand at an unprecedented pace.

These beliefs are centered around self. The focus is our benefits instead of cross of Christ and instead of the harvest.

I’ve heard it said that we as Christians no longer have to confess our sins. False grace.

Yesterday I was challenged to focus on love  and to redefine certain scriptural interpretations to make them more favorable to the homosexual community. False love.

Ignoring God’s holiness and justice in our lives does not equal grace.

Tolerance does not equal love.

True love and true grace are found at the cross of Christ. God’s intolerance of sin resulted in the death of his Son. There is no way he has suddenly become tolerant of those sins today.

Mark 8:34 (NKJV) 34 When He had called the people to Himself, with His disciples also, He said to them, "Whoever desires to come after Me, let him deny himself, and take up his cross, and follow Me.

Many in the church will be shocked to find themselves in Hell one day.

This is what God spoke to me after my life transforming encounter with the forces of Hell 21 years ago.

The false grace/false love messages are resulting in entire church congregations unwittingly buying a ticket to Hell, all while they lift their hands and worship Jesus and read their Bibles and pay their tithes. They have an imaginary salvation.

Jesus told five out of seven churches of believers in Revelation that they were lost, on the way to destruction. 5 out of 7 professing Christians were Hell bound! It’s horrific yet easy to believe that this ratio may be accurate in our churches today!

Leaders will most certainly be held accountable for this silent slaughter of God’s children.

It’s time to speak plainly about the truths of scripture, the severity of the hour and the mandate of obedience. Heaven and Hell lie in the balance.

Ephesians 5:4-6 (ESV) 4 Let there be no filthiness nor foolish talk nor crude joking, which are out of place, but instead let there be thanksgiving. 5 For you may be sure of this, that everyone who is sexually immoral or impure, or who is covetous ( that is, an idolater), has no inheritance in the kingdom of Christ and God. 6 Let no one deceive you with empty words, for because of these things the wrath of God comes upon the sons of disobedience.

The passage goes on to say…

Ephesians 5:10-11 (ESV) 10 and try to discern what is pleasing to the Lord. 11 Take no part in the unfruitful works of darkness, but instead expose them.

We must discern, and then expose darkness. We must not become so focused on pleasure and enjoyment, especially as Christians. In fact, we can’t be primarily focused on being entertained in the name of God. We must take up our crosses, discern what is pleasing to God (not to us) and expose darkness!

Check out this verse regarding focus on self:

Romans 2:8-9 (ESV) 8 but for those who are self-seeking and do not obey the truth, but obey unrighteousness, there will be wrath and fury. 9 There will be tribulation and distress for every human being who does evil, the Jew first and also the Greek,

This is the risk the false grace/false love movement presents. This is the fruit.

Watch what happens when true grace is in the equation:

Acts 4:32-35 (ESV) 32 Now the full number of those who believed were of one heart and soul, and no one said that any of the things that belonged to him was his own, but they had everything in common. 33 And with great power the apostles were giving their testimony to the resurrection of the Lord Jesus, and great grace was upon them all. 34 There was not a needy person among them, for as many as were owners of lands or houses sold them and brought the proceeds of what was sold 35 and laid it at the apostles’ feet, and it was distributed to each as any had need.

So, we see those in the church had great grace! Does that mean God’s judgment and holiness is no more? No way. Check out a couple of people who also had great grace on their lives:

Acts 5:1-11 (ESV) 1 But a man named Ananias, with his wife Sapphira, sold a piece of property, 2 and with his wife’s knowledge he kept back for himself some of the proceeds and brought only a part of it and laid it at the apostles’ feet. 3 But Peter said, “Ananias, why has Satan filled your heart to lie to the Holy Spirit and to keep back for yourself part of the proceeds of the land? 4 While it remained unsold, did it not remain your own? And after it was sold, was it not at your disposal? Why is it that you have contrived this deed in your heart? You have not lied to men but to God.” 5 When Ananias heard these words, he fell down and breathed his last. And great fear came upon all who heard of it. 6 The young men rose and wrapped him up and carried him out and buried him. 7 After an interval of about three hours his wife came in, not knowing what had happened. 8 And Peter said to her, “Tell me whether you sold the land for so much.” And she said, “Yes, for so much.” 9 But Peter said to her, “How is it that you have agreed together to test the Spirit of the Lord? Behold, the feet of those who have buried your husband are at the door, and they will carry you out.” 10 Immediately she fell down at his feet and breathed her last. When the young men came in they found her dead, and they carried her out and buried her beside her husband. 11 And great fear came upon the whole church and upon all who heard of these things.

Their disobedience in a season of great grace resulted in great judgment. And, then, fear hit the church.

We need this fear of the Lord again!

If we are to avoid a repeat of this, we must renounce the false grace/false love messages and sound the alarm of holiness and death to self!

When the cock crows, will you be running for your life as you curse yourself or will you be at the foot of the cross as the blood of Jesus pours out over you?

Will you be using God for personal gain and experience his judgment or will you embrace the fear of the Lord?

A crisis of the cross is coming to the church again.