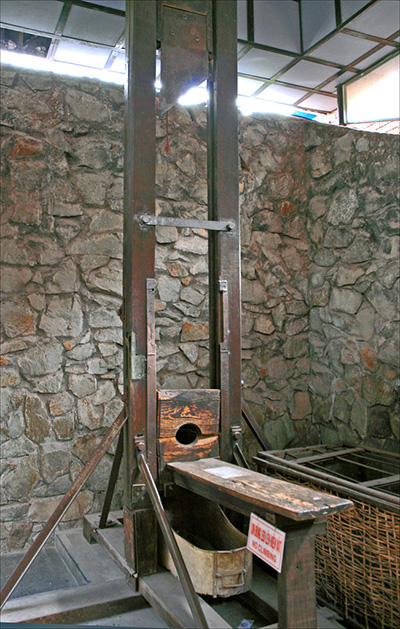 Those in society presenting a risk will first be marginalized and then eliminated.

I'll never forget the terror I felt watching A Thief in the Night, an apocalyptic movie from the 1970's seen by over 300 million people. Christians who refused to take the Mark of the Beast were led to the guillotine. No resister was spared, not even small children. (Regardless of the timing of the rapture, Christians can and will exist during the Tribulation period.)

We are living in the final moments leading up to times of great trouble in the world. It's true that difficult times are upon us now, but, especially in America, what we are experiencing is paradise compared to the horrors to come.

Many believe once the end-time progression has fully matured, those who resist the mandates of a coming global leader will be mercilessly executed. This certainly includes biblical Christians and others who rise up with guns a blazin' in opposition to tyranny.

Canadian pastor Artur Pawlowski who has resisted the mandates to wear masks and cancel church services was recently arrested on the tarmac at Calgary International Airport.

“They came for me, be sure of it, they are coming for you as well,” he said warning U.S. audiences.

There will be consequences if Americans don't take a stand, he continued: “If you will not do it, you're next.”

This is where it gets interesting, and where we as Believers in Jesus must understand the larger picture. We must also use great wisdom when dealing with the spirit of the age.

News flash: When all is said and done we will lose this fight.

I'm not trying to demoralize anybody nor am I buying into any sort of defeatism. I've read the Book and I am fully aware that martyrdom is very much in the future for many of us. The final victory is not carnal or earthly. After the Great Tribulation period and then ultimately after the Millennial reign, Satan and his hordes will be eliminated. We win, they lose.

But in the not too distant future, we will be permanently cancelled. No type of right-wing rebellion against the tyranny will work. Resistance is futile. Scripture makes that clear. Does that mean we give up and give in? No. Contending for righteousness is always appropriate, and there certainly can and will be important short-term victories. We can and should fight the fight (again, with wisdom) by promoting righteous laws and challenging unrighteous norms.

WE ARE BEING CONDITIONED

Today, social media and politics are the primary tools the enemy is using to force his agenda. Cancel culture is here to stay and it will get progressively more punitive, restrictive and threatening. This is why our strategies must go much further than ranting on Facebook and wearing MAGA hats. God is preparing his church for great persecution and he needs us to accurately discern the signs of the times.

Social media giants are conditioning us, muzzling us and attempting to force us into compliance. What we say, what we believe and what we do will result in affirmation or cancellation. Resisters will resist, but those who are Spirit-driven will be prepared to respond rightly to the evil end-time strategy.

Ultimately, the plan is for undesirables (you and me) to be fully eliminated. During the Tribulation that may come in the form of a guillotine. In the seasons leading up to that we'll see an increase in propaganda, conditioning, cancellation and shaming aimed at those who voice any measure of opposition to the societal norms.

Do we simply unleash the Ben Shapiro's and Donald Trump's of the world to rage against the machine, or is there another, better response? While I appreciate what Ben and President Trump have done, and I do believe God can and has used methods they have employed, we need to zoom out and look at the bigger picture. This isn't about saving America anymore. This is about preparing for an encounter with the greatest evil the world has ever known.

How many churches are strategically preparing the people for trouble? I'm not talking about stocking up on toilet paper, fighting against liberal lawmakers or sharing the latest memes about Dr. Fauci. I mean, is the church praying, fasting and contending in tears for an outpouring of God's Spirit? Are pastors teaching on the end times? What is the spiritual response to today's crisis?

A Thief in the Night had me disturbed as a child and the truth it conveyed has me disturbed as a 52-year-old adult, though the reasons are very different. Then I was concerned for my own life. Today I'm grieved at the response of the church. In the near future, Christians who are rightfully prepared will stand against the threats and refuse to align with the anti-Christ, even if it means certain death. Those who are not will easily give in to the pressures of being permanently cancelled. No food, water, medical care, electricity or other necessities will be too great a price to pay for many.

Our primary and constant response must be fervent prayer, radical consecration, holy living and devotion to the Word of God.

In the short term I believe it's important that we do engage culture. We can win some of the current battles and push back the agendas of the enemy. If we use supernatural wisdom, we can see laws changed, social media transformed and tyranny confronted. It's a valuable and appropriate fight anytime we push back on darkness, especially when it's attempting to destroy our nation.

We must understand, however, that any victory in this realm will be short lived. Ultimately, the enemy will rage with such strategic precision that all who resist will be eliminated. Are we prepared to die as martyrs? Are we truly living and praying and walking in the Spirit? Are our children ready for overwhelming and terrifying persecution? If not, that must be our focus. It's about to get very interesting in the world, and we must do all we can to be ready to respond.