Barbara Yoder says this about The Coming Church by John Burton, “Read with care. This is the future.”

In my encounter, the vision I saw was shocking and quite mysterious. I have had many visions of the Church, of reformation, but this one was markedly different. It sure didn’t look like a vision of the Church, but it immediately felt like one.

I was standing in an apocalyptic looking environment. It was dark and weighty. In front of me was an absolutely massive, burning crater. God immediately revealed to me that I was looking at the soon coming Church. 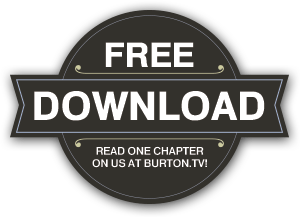 We must absolutely REFUSE to tone down the activity of the Holy Spirit out of respect of those less hungry! God is a CONSUMING FIRE, and he is about to consume what is unholy and compromised. 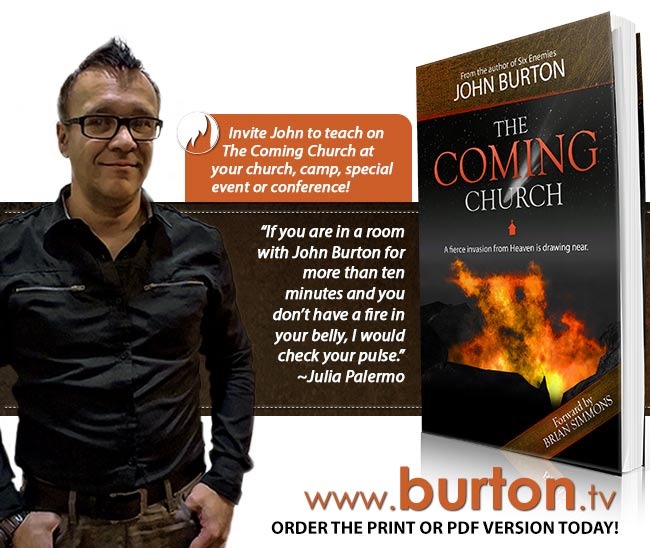 ORDER THE COMING CHURCH TODAY! Choose either the 300+ page printed version or a PDF e-book that can be downloaded immediately!

This book will rock your boat! John Burton isn’t an ordinary church leader. He is one of the emerging, cutting edge and at times raw (cuts to the chase) ministries who are changing the face of the church. Some will be upset with this book. Those lovers of God, radical revelatory types will jump up and down. John’s book will set them on fire. Read with care. This is the future.
Barbara J Yoder

Want to grow your church? Increase your success and influence in the community? Don’t read this book! John Burton isn’t going to give you the latest Church growth strategies or messages that will make your life easier. This book is a clarion call to the Church to quit selling her birthright and to accomplish all God has for her.
Anyone can criticize the church, John tears down while building up and calling forth the Coming Glorious Church!
Chris Ferguson

The Coming Church is a must read for every Christian. This is a timely word and challenge to seriously get aligned with the Kingdom for such a time as this. It will ignite an urgency and fire in any reader who is willing to wrestle and respond.
Amy Smith

The spirit of God has rested upon John Burton; the Lord has placed fire in his hands. That translates in the intercession-driven ministry that pours out of him.
The power & revelation the Lord has released into John Burton is a breath of fresh air. It is so fresh that I have not seen the uniqueness he bears elsewhere.
This book carries fire on every page. That fire leaps out bringing awakening to the deep places within you as the Holy Spirit moves through the revelation of the coming church and our part in it. There’s no denying it, and there’s no hiding it as the revelatory words are laid out on the table. This book screams ‘Ready or not, here I (the church) come!’ Are we ready to receive the revelation? Better yet, are we willing to receive it?
Jill Janco

John Burton is available to minister in your church or at your conference or event. John has been developing and leading ministries for over 25 years and is a sought out teacher, prophetic messenger and revivalist. John has authored ten books, is a regular contributor to Charisma Magazine, has appeared on Christian television and radio and directed one of the primary internships at the International House of Prayer (IHOP) in Kansas City. Additionally, he has planted two churches, has initiated two city prayer movements and a school of ministry.

John Burton has a long history of planting churches, pastoring, authorship and much more. However, knowing him personally, all of his credentials are outweighed by his passion for revival and the supernatural fire of God. I have no doubt that he has and would lay down everything for that cause. His radical faith mixed with undying pursuit has led him to encounter the Lord in miraculous ways including dreams, visions and fresh revelation. The bottom line is, John Burton has a message that the body of Christ needs to hear.
Dr. Andy Sanders
5 Fold Media

John Burton is a man with unquenchable passion for God. His life is a living Epistle of the truth that the Kingdom of God is not just in word, but in power. He lights fires wherever he goes leaving behind the unmistakable fragrance of the life of Christ. I highly recommend his ministry to you.
Glenn Bleakney
President of Awake Nations

OH MY WORD!! Talk about an on time message from John Burton last night @ God Invasion!! I can truly say it was so refreshing to hear & experience!! Haven't heard this caliber of teaching in over 30 years! He is a TRUE revivalist & while we think REVIVAL is one thing, it's soooo much more!! Get ready folks for GOD'S version of Revival!! It's gonna rock your world!!
Cindy Hicks Nobles

John carries a real passion and anointing for revival, breakthrough and transformation. He carries and releases the tangible fire of God and brings people into encounters with God's presence. He is a strong equipper in the areas of prayer and evangelism and mobilizes people to carry God's word and presence outside the four walls of the church building. John is also a great preacher of the word. He has had many years of ministry experience both as a pastor and evangelist. His understanding of local church ministry makes his ministry well rounded and unique. He pastors, oversees a school of ministry and travels releasing the fire of God and igniting hearts with a passion for Jesus. I believe he would be a great blessing to your church.
Matt Sorger

John Burton is a man who has continued to allow himself to be thrust into the middle of what God is doing. He not only hears from Heaven, but is willing to boldly shout it from the rooftops. If John is stirred about something, I would recommend that you listen.
JD King
International Director
World Revival Network of Ministries

I’m thankful for men like John Burton who hear a sound coming out of heaven, a trumpet sound, calling this generation to something more than good meetings and life as usual. We need men and women who are more than echoes of the past, but voices who prophesy what is to come. I believe those men and women are being prepared to arise and take their place in human history.
Dr. Brian Simmons
The Passion Translation

Visit www.burton.tv now to order The Coming Church or one of John’s other powerful books! 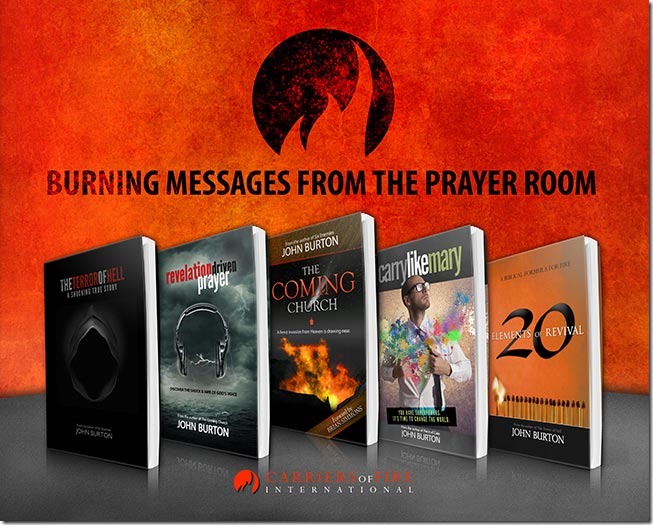