Discover how to pray, walk and live in the Spirit TONIGHT at the School of Prayer! Join us for teaching & intercession at 7pm! 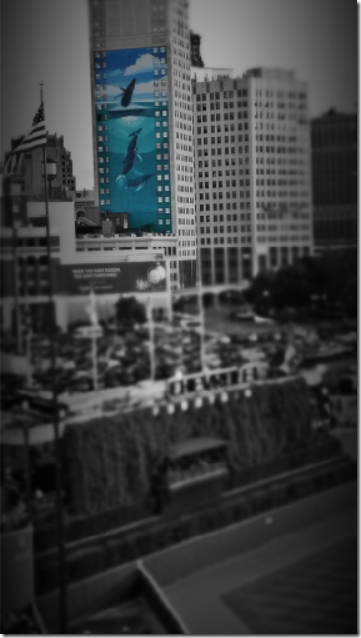 If you are in the Detroit region, join us at 7pm!

If you are from another region, you can watch live online at www.thefurnace.tv/live.

In light of everything that’s happening in the world right now with ISIS and the advance of terrorism, I’d like you to read what I consider to be one of the most important prophetic warnings I’ve ever received:

As I sat up high at Comerica Park last night watching a Tiger’s game, I saw a mural on a building that God revealed to me when I first visited Detroit.

I had a dream, and afterwards I visited Detroit to minister, and then saw the mural of jumping whales which was a key part of the dream.

It’s a warning dream, and Detroit must respond in repentance and intercession—as must the nation. Here’s the picture I took last night at the game and also the dream. (This is taken from the chapter in my book The Coming Church titled Their Freedom is Your Mission.)

Here is a clear example of a sharp, prophetic message. Will we respond to the call or casually watch from the sidelines?

It would be nice if all of our dreams, visions and communication from God had the feel of running and dancing through a field of daisies, but it’s more important that we receive accurate data than imaginary, feel good stories.
This dream was anything but candy canes and ice cream. To date, other than my encounter with Hell in the early 1990s, I’ve never received such an urgent and troubling dream of God.

The first scene in my dream represented a typical American day. I was in my basement in a really comfortable leather recliner, sitting in front of a large television. I was excitedly watching my favorite NFL team, the Chicago Bears, play in a nationally televised evening game. I was thoroughly entertained and was settling in for a great night of football.

The scene then suddenly changed. I found myself in the captain’s seat of the largest commercial airplane I’d even seen. In fact, this jet was capable of holding over 1000 people. Everybody in the airplane was excited and ready for the journey—and they were all blood-bought Christians. They represented an end-time remnant being prepared by God for the days ahead.