Do you complain or gossip? Don’t die in your desert! Last night at Revival Church was heavily saturated by the Holy Spirit…listen now!

FIRST: The deadline to register for thelab school of fire is March 20th! www.revivallab.com

There was a weighty, drunkenness of the Holy Spirit last night at Revival Church!

Greg Davis was amazing as he led worship…the flow of intercession and worship was insane!

The liquid love and hard core challenge of God was hitting us all… absolutely remarkable! 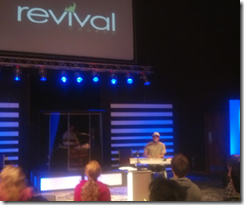 i.      Salvation & Deliverance: The initial goal in the Exodus was to escape captivity. (inward)

ii.      Intimacy & Offering: The secondary goal was to worship God in intimacy in the desert. (upward)

iii.      Warfare & Possession: The ultimate goal was to take their new culture of intercession and worship into the Promised Land and conquer demonic strongholds on cities that stand in the way. (outward)

b.      This is our focus at Revival Church: get you free, encounter God in intimacy, rise up as warriors and fulfill a mission. All three must be active!

i.      The house of prayer must come before we take the city!

a.       They had been slaves there for over 400 years, and God went to great lengths to deliver them from bondage.

i.      They appreciated the deliverance, but they didn’t transfer their gaze from inward to upward, from them to God.

b.      Shortly after­ their salvation form Egypt, due to their per­sis­tent unbe­lief that God would faith­fully and safely take them into a land of their own, the Promised Land (Canaan–or Israel), God brought judg­ment and chas­tise­ment upon them (Num­bers 13–14). He sent them into the desert to wan­der for 40 years. (This is most Christians!) All of the peo­ple aged 20 years or older were des­tined to die in the desert and to never enter the Promised Land because of their unbe­lief (Num­bers 14:26–35, Hebrews 3:16–19).

c.       The great mistake? The Israelites were known for their complaint!

ii.      Their complaining led to unbelief which led to wandering and then death.

iii.      One of the most tragic mistakes we can make is to assume our attitudes and personal dispositions don’t have much of an impact.

d.      Numbers 11:1 (ESV) 1 And the people complained in the hearing of the LORD about their misfortunes, and when the LORD heard it, his anger was kindled, and the fire of the LORD burned among them and consumed some outlying parts of the camp.

i.      Dang! What is that! To be destroyed by serpents! Hard core! The Destroyer!

f.        Numbers 14:1-10 (ESV) 1 Then all the congregation raised a loud cry, and the people wept that night. 2 And all the people of Israel grumbled against Moses and Aaron. The whole congregation said to them, “Would that we had died in the land of Egypt! Or would that we had died in this wilderness! 3 Why is the LORD bringing us into this land, to fall by the sword? Our wives and our little ones will become a prey. Would it not be better for us to go back to Egypt?” 4 And they said to one another, “Let us choose a leader and go back to Egypt.” 5 Then Moses and Aaron fell on their faces before all the assembly of the congregation of the people of Israel. 6 And Joshua the son of Nun and Caleb the son of Jephunneh, who were among those who had spied out the land, tore their clothes 7 and said to all the congregation of the people of Israel, “The land, which we passed through to spy it out, is an exceedingly good land. 8 If the LORD delights in us, he will bring us into this land and give it to us, a land that flows with milk and honey. 9 Only do not rebel against the LORD. And do not fear the people of the land, for they are bread for us. Their protection is removed from them, and the LORD is with us; do not fear them.” 10 Then all the congregation said to stone them with stones. But the glory of the LORD appeared at the tent of meeting to all the people of Israel.

iii.      You would think the complaining would end…but no! Check it out!

1.      Numbers 16:1-3 (NIV) 1 Korah …became insolent 2 and rose up against Moses. With them were 250 Israelite men, well-known community leaders who had been appointed members of the council. 3 They came as a group to oppose Moses and Aaron and said to them, “You have gone too far! The whole community is holy, every one of them, and the LORD is with them. Why then do you set yourselves above the LORD‘s assembly?”

2.      Numbers 16:31-33 (NIV) 31 As soon as he finished saying all this, the ground under them split apart 32 and the earth opened its mouth and swallowed them, with their households and all Korah's men and all their possessions. 33 They went down alive into the grave, with everything they owned; the earth closed over them, and they perished and were gone from the community.

1.      Today it’s expected that leaders make it easy for people to follow.

2.      I disagree. Leaders are called to lead you into the most challenging, risky and humanly impossible adventure!

5.      If you are going to follow apostolic leaders, you better have your running shoes on!

6.      Philippians 3:13-14 (ESV) 13 Brothers, I do not consider that I have made it my own. But one thing I do: forgetting what lies behind and straining forward to what lies ahead, 14 I press on toward the goal for the prize of the upward call of God in Christ Jesus.

7.      1 Corinthians 9:24-26 (ESV) 24 Do you not know that in a race all the runners run, but only one receives the prize? So run that you may obtain it. 25 Every athlete exercises self-control in all things. They do it to receive a perishable wreath, but we an imperishable. 26 So I do not run aimlessly; I do not box as one beating the air.

a.       Apostolic leaders lead into a difficult, costly mission with a sharp prophetic edge.

e.       Ephesians 4:11-12 (ESV) 11 And he gave the apostles, the prophets, the evangelists, the shepherds and teachers, 12 to equip the saints for the work of ministry, for building up the body of Christ,

b.      The older generation complained, grumbled, sinned sexually, had idols, etc… but the younger gen­er­a­tion was hum­bled, tested and dis­ci­plined by the Lord dur­ing their desert sojourn.

i.      Joshua 3:4-5 (ESV) 4 …Do not come near it, in order that you may know the way you shall go, for you have not passed this way before.” 5 Then Joshua said to the people, “Consecrate yourselves, for tomorrow the LORD will do wonders among you.”

1.      Verse 4 is why we must embrace apostolic leadership—we have never been this way before…apostles are ‘sent ones’…they are pioneers.

b.      Despite some resistance from American Indian tribes such as the Shawnee, in 1775 Boone blazed his Wilderness Road through the Cumberland Gap in the Appalachian Mountains from North Carolina and Tennessee into Kentucky. There he founded the village of Boonesborough, Kentucky, one of the first American settlements west of the Appalachians.

c.       Boone was a militia officer during the Revolutionary War (1775–83), which in Kentucky was fought primarily between the American settlers and the British-aided Native Americans. Boone was captured by Shawnee warriors in 1778, who after a while adopted him into their tribe.

d.      Before the end of the 18th century, more than 200,000 European people migrated to Kentucky/Virginia by following the route marked by Boone.

2.      The only way we can survive such a dangerous mission is if we follow verse 5 instructions: Consecrate yourselves and prepare for wonders!

b.      Notice the remedy: The younger generation embraced a fasted lifestyle as they consecrated themselves…and also embraced ridiculous faith as they were called to step into the waters of the Jordan and march around the walls of a fortified city.

ii.      We are moving into the uncharted, impossible, not into the predictable and casual! Daniel Boone! Joshua! How about Peter Pan?

3.      Joshua 3:2-3 (ESV) 2 At the end of three days the officers went through the camp 3 and commanded the people, “As soon as you see the ark of the covenant of the LORD your God being carried by the Levitical priests, then you shall set out from your place and follow it.

4.      God is raising up trailblazing leaders who carry the presence of God into the land of promise! Dare you follow?!

5.      Joshua 3:9-13 (ESV) 9 And Joshua said to the people of Israel, “Come here and listen to the words of the LORD your God.” 10 And Joshua said, “Here is how you shall know that the living God is among you and that he will without fail drive out from before you the Canaanites, the Hittites, the Hivites, the Perizzites, the Girgashites, the Amorites, and the Jebusites. 11 Behold, the ark of the covenant of the Lord of all the earth is passing over before you into the Jordan. 12 Now therefore take twelve men from the tribes of Israel, from each tribe a man. 13 And when the soles of the feet of the priests bearing the ark of the LORD, the Lord of all the earth, shall rest in the waters of the Jordan, the waters of the Jordan shall be cut off from flowing, and the waters coming down from above shall stand in one heap.”

iii.      Joshua 6:1-2 (ESV) 1 Now Jericho was shut up inside and outside because of the people of Israel. None went out, and none came in. 2 And the LORD said to Joshua, “See, I have given Jericho into your hand, with its king and mighty men of valor.

b.      If you want your Goliath, you have to conquer your lion and your bear.

c.       If you are not interested in taking the city, you’ll waste away in the desert on the wrong side of promise.

d.      If you aren’t interested in taking on Goliath, you’ll be bait for a roaring lion looking for someone to devour.