A premature outpouring of God's spirit would result in people vacating their place of prayer to experience an adrenaline rush.

This nation is in a state of extreme emergency, yet few are responding with a lifestyle of intercession.

Let me say this clearly: If you are a Christian, deep, continual, strategic intercession is your primary daily calling!

As in the days of old, every time the church doors are open, we should be there ready to pray!

The 24/7 church is coming and we will soon find ourselves together in intercession most every day of the week! Will you wait for another bomb to detonate and for more lives to be lost or will you start your new life of corporate intercession THIS WEEK?

►Detroit needs a house of prayer like never before, and EVERY CHRISTIAN must show up day after day to pray! Start now!

There is an emerging remnant of pavement people who understand this, who will forgo personal comfort and hit the concrete in prayer and worship as we saw in 2 Chronicles 7:

I have been continually grieved and disturbed for more than two decades of ministry by the lack of fervent prayer in the church. I literally can’t think of a single place in the world that I’d rather be than in the prayer room—even if it’s a concrete floor. The fact that calls to prayer are resisted with excuses of busyness, disinterest and the ever increasing cares of life is evidence that we still don’t understand a primary reason we are alive—to minister to God in personal and corporate intercession.

With that in mind, prayer rooms remain empty because we as leaders know people are averse to prayer…and we offer them alternate activities.

Instead of burning intercession for the nations, many use prayer as an attempt to achieve or protect their own definition of a normal life. When normalcy is stable, prayer ceases. If someone is sick, they pray for God to restore them to the normalcy of health. If they are short on finances, they pray for God to bring them to financial normalcy.

The problem with that is that prayer isn’t mostly about focusing on self and securing the life we hope for—it’s for deeply knowing Jesus and interceding for the world to experience the life that he paid the price for.

More than two decades ago, as a new burning child of God, I was met with confusion that is still with me today.

I was helping give leadership to a monthly regional youth event that was drawing around 100 young people for all over the Dayton, Ohio area. I’ve always believed the hour of prayer before the service was actually much more important than the service itself. (Anything driven by prayer carries extreme importance.)

I was truly confused each month as we sounded the alarm, spread the word, plastered signs in the foyer and let everybody clearly know that they were needed in prayer prior to the service. Each month we’d have 5-10 people in the huge sanctuary in prayer for an hour, while I watched a hundred people cram into a tiny foyer waiting for the service to start.

Was my promotion insufficient? Did I not make it clear enough? It was so packed in the foyer that faces were nearly squished up against the glass on the doors—right next to the signs inviting them to enter and pray.

I’ve watched this scenario play out time and again through my youth and senior ministry years. In San Diego I’d load up the bus with 50 kids to take them to the beach on Thursday, and then have 5 or 6 join me on prayer walks on Friday.

I will continually be confused and disturbed by the lack of passion for intercession—especially in a time of crisis like we are now in in America.

THE CRISIS IN OUR NATION

Last night at theLab House of Prayer, we prayed about the recent bombings in Boston, the earthquakes around the world and the explosion in Texas, and we interceded for Detroit. There have been many urgent prophecies and dreams about a nuclear level event downtown Detroit.

For those who only pray to achieve personal normalcy, there is little reason to fill the prayer rooms. Detroit is still standing.

However, even now, Detroit is not in revival. Even now there is suicide and murder in this region. Children are abused. Political corruption is extreme. An outpouring is no where to be seen.

Additionally, we are experiencing a Jeremiah 2 crisis. Check it out:

Jeremiah 2:4-8 (ESV) 4 Hear the word of the LORD, O house of Jacob, and all the clans of the house of Israel. 5 Thus says the LORD: “What wrong did your fathers find in me that they went far from me, and went after worthlessness, and became worthless? 6 They did not say, ‘Where is the LORD who brought us up from the land of Egypt, who led us in the wilderness, in a land of deserts and pits, in a land of drought and deep darkness, in a land that none passes through, where no man dwells?’ 7 And I brought you into a plentiful land to enjoy its fruits and its good things. But when you came in, you defiled my land and made my heritage an abomination. 8 The priests did not say, ‘Where is the LORD?’ Those who handle the law did not know me; the shepherds transgressed against me; the prophets prophesied by Baal and went after things that do not profit. 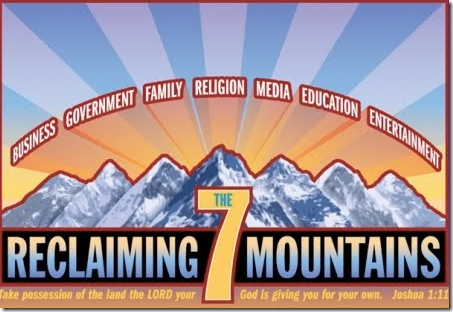 I personally don’t see the church fully taking over the seven mountains in this age as some do, but I do believe we are to have significant influence and impact, and to give leadership as God opens those doors.

This being said, the thought of an idolatrous church increasing in influence in the seven mountains should cause us all to shudder.

A consecrated, praying church that is intimate with God is mandatory!

Psalm 24:3-4 (ESV) 3 Who shall ascend the hill of the LORD? And who shall stand in his holy place? 4 He who has clean hands and a pure heart, who does not lift up his soul to what is false and does not swear deceitfully.

Today, much of the church is at the base of the mountain fashioning an idol, a god of their own design, while Moses met with God on top of it.

The prayer movement that’s focused on the heart of God will result in continual repentance as we allow God to search our hearts and burn up any idol or any desire for one!

Check out how serious God is about the call to ascend the mountain:

Exodus 19:16-25 (ESV) 16 On the morning of the third day there were thunders and lightnings and a thick cloud on the mountain and a very loud trumpet blast, so that all the people in the camp trembled. 17 Then Moses brought the people out of the camp to meet God, and they took their stand at the foot of the mountain. 18 Now Mount Sinai was wrapped in smoke because the LORD had descended on it in fire. The smoke of it went up like the smoke of a kiln, and the whole mountain trembled greatly. 19 And as the sound of the trumpet grew louder and louder, Moses spoke, and God answered him in thunder. 20 The LORD came down on Mount Sinai, to the top of the mountain. And the LORD called Moses to the top of the mountain, and Moses went up. 21 And the LORD said to Moses, “Go down and warn the people, lest they break through to the LORD to look and many of them perish. 22 Also let the priests who come near to the LORD consecrate themselves, lest the LORD break out against them.” 23 And Moses said to the LORD, “The people cannot come up to Mount Sinai, for you yourself warned us, saying, ‘Set limits around the mountain and consecrate it.’” 24 And the LORD said to him, “Go down, and come up bringing Aaron with you. But do not let the priests and the people break through to come up to the LORD, lest he break out against them.” 25 So Moses went down to the people and told them.

So, Moses ascended, and the people played. The prayer movement will absolutely separate out those who are truly devoted to God and those who are focused on self:

Exodus 32:4-6 (ESV) 4 And he received the gold from their hand and fashioned it with a graving tool and made a golden calf. And they said, “These are your gods, O Israel, who brought you up out of the land of Egypt!” 5 When Aaron saw this, he built an altar before it. And Aaron made a proclamation and said, “Tomorrow shall be a feast to the LORD.” 6 And they rose up early the next day and offered burnt offerings and brought peace offerings. And the people sat down to eat and drink and rose up to play.

Eat, drink, play. As long as the normalcy of personal consumption and entertainment is safe, the church will see no need to pray—all while the consecrated remnant, the pavement people, are on the mountain in the presence of God receiving instructions for revival and Kingdom advance.