I’m going to include an article in a moment that will cause you to come alive.

JD King is a great friend and a brilliant revival mind. He just got back from Bethel and is feeling something very real and powerful is going to land at Revival Church Sunday.

You will glean so much from him as he shares key revival principles. I just got off the phone with him and he casually shared a few things that are right on:

Come at 5pm for a critical and exciting time of prophetic intercession and then at 6pm we will start the night full of faith for healings and miracles!

Here’s the article on the Smithton Outpouring:

SMITHTON, Mo. (ABP)–It's Saturday night at Smithton Community Church, and the outpouring service is starting to sizzle. The floor shudders from the impact of worshipers leaping in unison as they sing along with a loudly electrified praise band.

At a signal to pray, hundreds of hands shoot up like football referees signaling a touchdown. During corporate prayer, the congregation pulses with an unintelligible drone of voices. 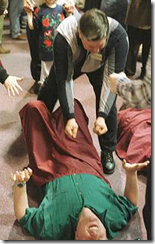 A WORSHIPER falls to the floor during an ecstatic experience at Smithton Community Church in Smithton, Mo. (Photo by Tim Palmer)

Through body-wracking spasms, breaking voices and tears, worshipers testify from the stage and the floor. They tell of deliverance from alcohol, from bitterness, from suicide, from skepticism.

Pastor Steve Gray shouts a scorching sermon on the need to bind the "strong man," Satan. Too many churches are preaching a selfish, self-centered, self-esteem gospel, Gray says. "Satan loves a selfish place, because he's selfish!"

Suicides, drugs and divorces didn't used to happen among church people, Gray remarks. "What's out there has gotten in here."

"Jesus is back on the scene again, and he's going after Satan like he did before! God wants to bring the kingdom into our midst. He's gonna free some people!"
Dozens of visitors stream forward near the end of the four-hour service. One member gets in a visitor's face to pray with fist-shaking fury; another stands behind to catch him when he collapses backward. Someone else drapes a blanket over the prostrate form.

One of those "slain" in the Holy Spirit rises after a short time and returns to her place near the wall. Asked to describe her experience, she simply smiles and replies, "I was with God."

Three years ago, a revival broke out in Smithton. As a result, this Central Missouri community–population 532–has drawn tens of thousands of visitors from across the United States and from other nations. The "Smithton Outpouring" has been described in magazines and on television nationwide.
People have used words like "Pentecostal," "charismatic" and "full gospel" to describe the worship service, Gray said. "If anything sets Smithton Community Church apart, it's that we're believing that the kingdom of God is happening now."

Kathy Gray admits the worship style at the non-denominational church can be shocking to those who aren't familiar with it. But she and her husband contend that practices such as speaking in tongues and being "slain in the Spirit" are innocent and harmless.

This is especially true, they say, when you compare them to other activities seen in many churches–gossip, manipulation, power struggles, love of money. No one's afraid of those, the Grays contend.
Before people react negatively to charismatic practices, Steve Gray suggested, they should ask themselves why they're not reacting similarly to backbiting, pride and other things the Bible clearly says to avoid.
People from nearly all denominations have come to Smithton, Gray noted. "There is a group within them whose hearts are crying out for more."

A large part of this church's ministry is to Christian believers who haven't gotten the help they feel they need in their own churches.

Gail Collins, who was raised a Southern Baptist, started attending the Smithton church 10 years ago. She remembers well the day in 1996 when revival broke out.

"When the power of God came in, I got set free from a lot of those things I couldn't change," Collins said. Her love for God deepened. "He enlarged my heart and gave me a strong desire to be a complete servant."
The power of the Holy Spirit isn't new, Gray said, but had been lost. "We're regaining what was lost through tradition, wrong ideas, wrong thinking. That's why it's available, because it was never supposed to go."
Worship services in churches often represent what happened to someone long ago, he noted. It was fresh then; it's stale now.

Just as the beaten man in the story of the Good Samaritan did not get help from the Levite or the priest, Gray said, people today are not getting help from churches.
"They're being told they are found, but they can't find God. So they come here to this unlikely place that doesn't fit the story."