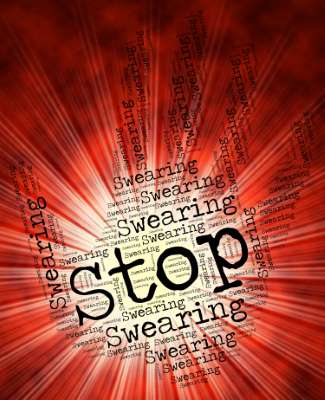 I remember the shock I'd feel decades ago at the sudden explosion of an F-bomb.

I've ventured into many caves over the years, and an extremely disorienting moment comes when all the lights are turned off. Perfect darkness. Your brain thinks it's seeing your hand waving in front of your wide-open eyes, but it's not. It's an illusion. The darkness is blinding. This type of darkness is altogether different than what we would experience walking through a dark alley or when we turn off the lights to go to bed at night. It's all encompassing. This is the ink-like blackness that's overshadowing the earth today. The world is getting more wicked, and, sadly, it's sucking much of the church into its black hole of immorality. Foul language in movies and media is routinely ignored as insignificant by many professing Christians today. A Born-Again Believer might very well feel singled out by the smirks and rolled eyes when they make their decision to live consecrated lives. Their devotion to holiness is worthy of mocking by their brothers and sisters in Christ it seems. Until the church finally washes its mouth out with the soap of the refining Word of God, we can't expect to see a move of righteous living in our nation. The F-bombs will keep detonating as if they were mere firecrackers. The truth is, a culture that has become defiled in this manner will embrace all sorts of fleshly, repulsive behavior. Just the other day I was eating with some friends in a nice, family restaurant. I was shocked when a song playing quietly in the background filled the air with F's and other foul words. How can this be okay? Normal? Unconcerning? A common irritant can be found in seemingly innocuous online news articles that for some unknown reason have to drop the F word into it. One moment I'm reading about a new cell phone on a tech website and the next I'm attacked by unnecessary and offensive vulgarities. For now, evil language has gone mainstream. Our world needs Jesus so very badly.

BEING TRUE TO OUR AUTHENTIC SELF?

I watched a TikTok video of a woman asking a popular motivational speaker, “Why do you find it necessary to use foul language in your speeches?” As if prepared in advance, the raw, abrasive yet skilled orator immediately retorted his defense. For him, it's more important to be true to his authentic self than to abide by arbitrary rules and norms. He genuinely believes his success is directly related to his authenticity. He admitted to cussing in front of his children and not being concerned that they do the same at school. Of course, the F's flew in his crafty, unapologetic response, unconcerned about defiling the souls around him. Another video from a family of social media influencers featured children repeatedly thrusting their middle fingers in the air, all with their dad encouraging their behavior. I suppose this father-of-the-year candidate is supporting his little one's venture to be true to their authentic selves. How tragic that people define who they are by that which is vile, immoral and repugnant. This is the state of our cave-dark world.

Many years ago, I worked in a video rental store. Back in the day your local video store was frequented by all, often ending in frustration as the person in front of you in line rented the last copy of the latest, greatest movie. One particular family visited our store regularly. However, they were unlike any of our regular customers. They never walked past the new releases or down the aisles filled with dramas, comedies, thrillers and horror movies. Each time they marched through the door they immediately strolled, as a uniquely awkward family, to the family section. They would choose an old, probably boring yet crispy clean movie to watch together as a family. One day I asked them if they had seen one of the mega-popular new movies (that was most likely rated PG). Their answer has stuck with me to this very day. “No, we don't watch any movie that's not rated G.” Not one unholy word would ever be intentionally consumed nor casually ignored in the name of entertainment. Years later I was in a packed church for a special multimedia-driven sermon. The guest speaker brought up the movie The Karate Kid on the giant screen. He asked for a show of hands of those who have seen the movie. Hundreds of hands shot up into the air representing nearly 100% of those in attendance. He then asked one of the youth workers, an authentically righteous lover of Jesus, what he thought of the movie. He carefully replied, knowing that he was being set up. “Well, I think it had good life lessons, and good moral principles. It was clean and wholesome.” At that moment the preacher hit play on the remote. The church was filled with gasps of horror as the cranked-up speakers boomed the words of the main character in the movie, Daniel. He aggressively hurled the obscenity God **** over and over in a moment of ferocious venting toward Mr. Miyagi. Understand, this was happening in a church that was known for its fervent pursuit of holiness. To say that what happened stunned everyone would be a severe understatement. People were aghast. Offended. What the man of God said next remains with me to this day. “So, you casually and eagerly admitted that you have watched this movie. What I just played, and more, filled your homes and your spirits, yet you are somehow offended that you heard it in the church?” His point was clear. Hypocrisy was exposed.

WE NEED A HOLINESS MOVEMENT IN OUR NATION

The cursing and defilement of our culture will only get worse. The darkness is thick and the light is despised. The church's hypocrisy is clear as Christians are filling their souls with evil by devouring inappropriate movies, articles, music and videos. The only hope is for widespread repentance and a refusal to allow ourselves to be tainted by the deadly curses (cursings) that our culture has adopted as benign. Let's contend for revival in a spirit of holiness as we take a stand against the darkness in our nation. The entertainment we so love isn't worth the degrading of our souls. Photo credit: www.depositphotos.com Image ID: 86198726 Copyright: stuartmiles Originally published by The Stream.
Posted in Culture, The Church and tagged cussing, f bomb, foul language, holiness, immorality, media, movies, music
Leave a comment 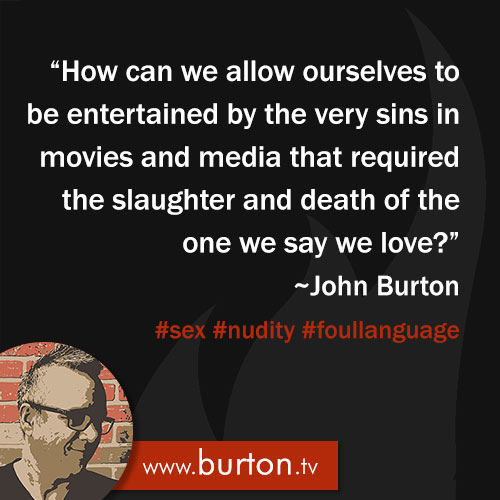 Christians have been called hypocrites by the LGBTQ+ community for years. They may be right.

I believe engaging in homosexual behavior is indeed sinful. It's a destructive activity that is forbidden by God and one that absolutely does make an authentic, saving relationship with God impossible. That is, if there is no repentance.

Unlike some, I don't believe we can equate sexual sin with other sins, presuming all sin to be the same. Different sins have vastly different consequences.

That being said, I absolutely agree with many LGBTQ+ supporters and promoters when they say Christians are hypocrites for opposing homosexuality. Of course, as a blanket statement such an accusation would be unfair. As a broad generality, however, they are right.

THE LGBTQ+ COMMUNITY IS RIGHT

1: a person who puts on a false appearance of virtue or religion
2: a person who acts in contradiction to his or her stated beliefs or feelings

Hypocrisy would be a fair accusation if Bible-believing Christians themselves took part in homosexual activity while preaching against it. While this absolutely does happen, it's not required for the label of hypocrite to stick. Something much more common results in Christian hypocrisy.

We can also consider the fact that heterosexual activity outside of marriage is forbidden by Scripture. Clearly it would make sense for a Bible-thumping, heterosexual, anti-gay zealot to be labeled a hypocrite if he or she were to be shacking up with their significant other. This is obvious.

Interestingly, according to Scripture, the actual act of sex, whether it's hetero or homosexual, isn't necessarily required to qualify as sexual sin.

““You have heard that it was said, ‘You shall not commit adultery.’ But I say to you that everyone who looks at a woman with lustful intent has already committed adultery with her in his heart. If your right eye causes you to sin, tear it out and throw it away. For it is better that you lose one of your members than that your whole body be thrown into hell.” (Matthew 5:27–29, ESV)

“For if we go on sinning deliberately after receiving the knowledge of the truth, there no longer remains a sacrifice for sins, but a fearful expectation of judgment, and a fury of fire that will consume the adversaries.” (Hebrews 10:26–27, ESV)

I wrote the following in an article titled No Naked People:

Sexual images are flashing before our eyes from every angle through media, marketing, video games and other invasive sources.

I’ve actually had Christians challenge me by saying it’s not possible for a man to avoid lust, as if it’s an expected part of our make up! I heard about another who said that the Bible doesn’t forbid lust, only lusting about married women! The culture is causing many hopeless and some defiant Christians to believe that freedom from sexual fantasy is not possible, or even necessary. God help this nation.

A report by George Barna on pornography is revealing.

The truth is, multiplied millions of Christian men and women very well may be those the LBGTQ+ camp is accurately hurling accusations at. If we lust, we have committed adultery. We are engaging in vile, forbidden sexual sin that God has renounced with crystal clarity.

PRACTICE WHAT WE PREACH

The moral of this tragic story is obvious. We disqualify ourselves from preaching on holiness if we refuse to live holy.

I'm not talking about truly repentant people who are surrendering their lives to Jesus, who are crucifying their flesh and who are in a determined process of deliverance and freedom from sexual sin. I'm addressing those who keep returning to their sin while preaching against it. I'm talking about plain, vanilla hypocrisy.

While there is absolutely a place for surrendered, consecrated followers of Jesus to deal directly with homosexual activism in an authentically loving and humble manner, I would suggest the battle should be waged from a different place.

We need a movement of purity, holiness and the fear of the Lord to strike the church in our nation. Judgment begins in the house of God. Repentance should start there too.

Don't be surprised if mocking, hatred and verbal assaults come our way if we refuse to humble ourselves and live free from the grip of very sin we are railing against.

“Put to death therefore what is earthly in you: sexual immorality, impurity, passion, evil desire, and covetousness, which is idolatry. On account of these the wrath of God is coming.” (Colossians 3:5–6, ESV)