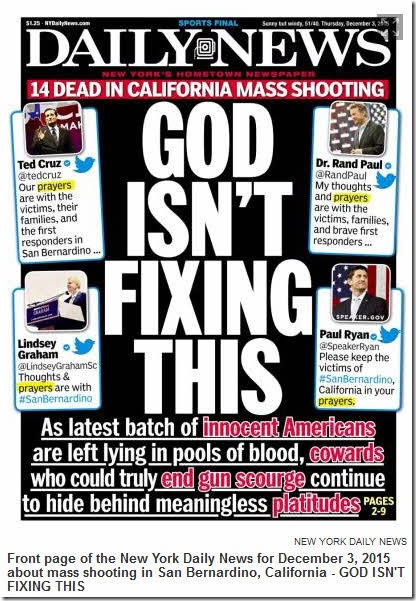 “God isn’t fixing this” is the insolent decree by the New York Daily News.

Somebody needs to proactively put the godless voices of the New York Daily News in their place—and that somebody just may be God himself. Rich Schapiro, as the writer of the article, I’m especially talking to you.

The response of many after the recent terroristic, murderous rampage in San Bernardino, California was to pray and to call the nation to prayer. Whether the prayer was done in a righteous, fervent and effective manner or not is open for discussion (James 5:16), which I’ll address below, but to assault compassionate people for praying—and to unabashedly insult God in the process—is repugnant.

The premise of the article is that we should be doing something instead of praying, such as controlling guns. The arrogant position they are assuming is that God is unnecessary and that we have the ability to bring resolution to an evil world in our own human power(or, more accurately, the power of the Democrats).

The headline of the New York Daily News on December 3, 2015 includes:

As latest batch of innocent Americans are left lying in pools of blood, cowards who could truly end gun scourge continue to hide behind meaningless platitudes.

Those last two words are in fact quite interesting, and possibly accurate.

platitude noun
a flat, dull, or trite remark, especially one uttered as if it were fresh or profound

If the accusation is that remarks that include mention of prayer are trite or casually uttered, there may be some truth to that.

Is it possible God could use the New York Daily News to call our nation to a culture of fervent, genuine intercession? Is it possible that their disgust with the religious right’s sometimes disingenuous rhetoric regarding prayer has merit, and that those who are spiritual should first hit our knees in deep repentance? Honestly, how many prayer movements are there right now that are continually interceding, night and day, for our nation? How many pastors are on their knees hours a day? What churches have been marked as furnaces of intercession?

Mr. Schapiro, I’ll tell you why God isn’t fixing this. It’s quite simple.

At every turn in recent years America has intentionally, strategically and aggressively disinvited God from our nation. His expulsion by those who are threatened by righteousness, morality and standards that used to define our country has had severe consequences.

You simply have to be kidding me if you think God is expected to respond after such national haughtiness and hatred of his standards has overtaken our culture. The cry has been God bless America, but only on our terms.

If we want God to fix this, it could happen almost overnight—if only the people of our nation, which includes you Mr. Schapiro, respond rightly to God—a God who yearns for you and us.

The quick, simple yet humbling and costly prescription for a God-sized fix is this:

13 When I shut up the heavens so that there is no rain, or command the locust to devour the land, or send pestilence among my people, 14 if my people who are called by my name humble themselves, and pray and seek my face and turn from their wicked ways, then I will hear from heaven and will forgive their sin and heal their land. 15 Now my eyes will be open and my ears attentive to the prayer that is made in this place. 2 Chronicles 7:13-15 (ESV)

God will shut up the heavens, allow the devourer to invade our land and send pestilence in order to shake us to our knees.

The Lord God, the Alpha and the Omega, the first and the last, is literally the only answer to the rampage of violence in our land.

Many mighty works have been done by God over the years in America. The great Azusa Street Revival changed the course of history as the Spirit of God invaded the world. Great healing revivals and movements launched from this land. Much more has been recorded and even more unrecorded on the amazing things God himself has done in this nation. Unfortunately that sets America up for destruction. This passage is terrifying:

Because God proved himself and worked wonders in the land they were held to a higher accountability. Eternity in Hell is the future for a people who do not repent. America, God is talking to us. He’s shaking us.

We need Jesus. Rich Shapiro needs Jesus. Humility, prayer and repentance are our only hope.

If we do this right we will begin to hear the tears behind the calls to pray when trouble comes. We will see the movie theaters close and the churches fill up with humble, surrendered people who want to do little more than pray. Trite calls to prayer will be replaced by emboldened leaders trumpeting the mandate to hit our knees. Solemn assemblies will replace political debates. Revival will come, protection will be had and our enemies will be disempowered.

I’d say that would make a nuclear level prayer movement in our nation well worth it.

Where is your God?

The New York Daily News is boldly shouting, “Where is your God?”

This shouldn’t surprise us. This is where we are. This is what we read about in Joel chapter two:

12 “Yet even now,” declares the LORD, “return to me with all your heart, with fasting, with weeping, and with mourning; 13 and rend your hearts and not your garments.” Return to the LORD your God, for he is gracious and merciful, slow to anger, and abounding in steadfast love; and he relents over disaster. 14 Who knows whether he will not turn and relent, and leave a blessing behind him, a grain offering and a drink offering for the LORD your God? 15 Blow the trumpet in Zion; consecrate a fast; call a solemn assembly; 16 gather the people. Consecrate the congregation; assemble the elders; gather the children, even nursing infants. Let the bridegroom leave his room, and the bride her chamber. 17 Between the vestibule and the altar let the priests, the ministers of the LORD, weep and say, “Spare your people, O LORD, and make not your heritage a reproach, a byword among the nations. Why should they say among the peoples, ‘Where is their God?’” Joel 2:12-17 (ESV)

God is gracious and merciful, slow to anger and abounding in steadfast love. But only he knows how long his judgment will be held at bay.

Our time is here to return to the Lord with all of our heart, with fasting, with weeping and with mourning. It’s time for a solemn assembly. No excuses. We all must show up and pray.

America, it’s time to rend our hearts and let this great nation see just where our God is.

He’s endeavoring to move in power among his people, and he’s ready to rescue this great land.