The condition in our nation is so weighty that we must awaken ‘groaning intercessors’ who contend together for revival in the church. 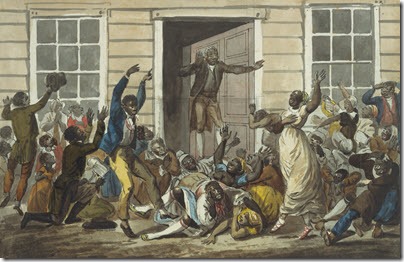 Throughout scripture we see groans preceding a great deliverance—and this deep groan of the Spirit must erupt in our churches and in our cities now. The days of quiet, sedate church services built upon human order must come to an end—Sunday mornings must resound with a prophetic shock and a new sound of trembling people exploding in groans of the Spirit.

Acts 7:34 (ESV) I have surely seen the affliction of my people who are in Egypt, and have heard their groaning, and I have come down to deliver them.

Romans 8:22-26 (ESV) 22 For we know that the whole creation has been groaning together in the pains of childbirth until now. 23 And not only the creation, but we ourselves, who have the firstfruits of the Spirit, groan inwardly as we wait eagerly for adoption as sons, the redemption of our bodies. 24 For in this hope we were saved. Now hope that is seen is not hope. For who hopes for what he sees? 25 But if we hope for what we do not see, we wait for it with patience. 26 Likewise the Spirit helps us in our weakness. For we do not know what to pray for as we ought, but the Spirit himself intercedes for us with groanings too deep for words.

I've been privileged to give leadership to some events where intercessors and hungry people have shaken and shocked atmospheres. The loud, erupting sound of groans have been resounding in our meetings. It’s been prophesied many times that a new sound is going to be released. A new tone. I am convinced that this is not a new musical style, but rather it is a new groan of the Spirit. It’s the tone of the groan that will be heard around the world.

One of the most misapplied scriptures is Romans 8:28. When people are struggling, it’s common to share this verse with them. It’s actually pretty bad counsel if we don’t let them know that this verse is dependent on the preceding verses. Romans 8:28 starts with the word “And,” which should reveal that it’s connected to what came before it:

Romans 8:26-28 (ESV) 26 Likewise the Spirit helps us in our weakness. For we do not know what to pray for as we ought, but the Spirit himself intercedes for us with groanings too deep for words. 27 And he who searches hearts knows what is the mind of the Spirit, because the Spirit intercedes for the saints according to the will of God. 28 And we know that for those who love God all things work together for good, for those who are called according to his purpose.

Things work together for good WHEN we allow the Holy Spirit to intercede through us with groans! No groan, no guarantee of success.

This is talking about a literal groan. Just like praying in tongues requires a literal sound to come out of our mouths, the groans are also deep, zealous sounds…tones…emitted from the depths of our inner man.

Churches must begin to become prayer and groan driven! The sound will break strongholds and usher in deliverance into our nation.

Yes, it will make a lot of people uncomfortable…but the Holy Spirit will be radically comfortable.

When the groans begin, Romans 8:28 initiates. As the powerful mysteries of God are exploding out of us in prayer, we easily find ourselves loving God with deep intimacy. We embrace the calling that’s on our lives. We have a resounding yes in our spirits even though we don’t know logically what we are agreeing with! In fact, bypassing our logic and intellect through groans of intercession is a primary reason WHY we are in agreement with God!

Our minds can’t understand what’s being prayed, and therefore can’t come into disagreement with it!

PRAYING IN TONGUES: THE SOLUTION FOR DEAD PRAYER MEETINGS

I don’t know that you can really have a dead prayer meeting if people are erupting in tongues!

Honestly, it’s difficult to understand why so many Charismatic churches minimize tongues in their meetings. It makes no sense whatsoever!

We need Azusa-level reports to shoot around the planet as we explode in supernatural cries!

In a skeptical front-page story titled “Weird Babel of Tongues”,[17] a Los Angeles Times reporter attempted to describe what would soon be known as the Azusa Street Revival. “Breathing strange utterances and mouthing a creed which it would seem no sane mortal could understand”, the story began, “the newest religious sect has started in Los Angeles”.[20] Another local paper reporter in September 1906 described the happenings with the following words:

…disgraceful intermingling of the races…they cry and make howling noises all day and into the night. They run, jump, shake all over, shout to the top of their voice, spin around in circles, fall out on the sawdust blanketed floor jerking, kicking and rolling all over it. Some of them pass out and do not move for hours as though they were dead. These people appear to be mad, mentally deranged or under a spell. They claim to be filled with the spirit. They have a one eyed, illiterate, Negro as their preacher who stays on his knees much of the time with his head hidden between the wooden milk crates. He doesn't talk very much but at times he can be heard shouting, ‘Repent,' and he's supposed to be running the thing… They repeatedly sing the same song, ‘The Comforter Has Come.'

The Comforter has come! Oh, for a movement where the testimony of our heart was simply that! The Comforter is here! He is blowing in and through us and there is absolutely no denying his love and power!

Now think of a typical American prayer meeting. I know, I don’t want to attend either!

We must see the tone of the groan return to the church again! Oh, and a supposed “disgraceful intermingling of the races” would do wonders for the a movement of unity and revival too, don’t you think? We could fix dry and dusty prayer meetings along with the current racial turmoil in the land at the same time!

I often propose to churches, and model it often in our own ministry, to pray for one or two hours straight in nothing but tongues. No English. No petition. No prayer requests. No worship. Nothing but tongues, nonstop, for hours. Prayer meetings, Sunday meetings and every other meeting would begin to radiate brightly and new life would come to the church almost overnight.

Every Friday night our team of local zealots would be invited into a different local church in the city. We’d pray, without ceasing, for two hours in tongues. In all, we prayed in over 170 total churches between the two cities.

We had one foundational rule: tongues would never be sacrificed or minimized for anything, including unity. How could true unity reign if we ask the Holy Spirit to wait outside the door?

It was always tempting, because of our love for pastors and people from all Christian streams, to remove the tongues requirement. That would gain us entrance to hundreds of additional churches that didn’t embrace the gifts of the Spirit. I was always resolute, however. I knew the movement would die when tongues ceased.

I simply don’t believe prayer is sufficiently powerful without the burning of the Holy Spirit. We need tongues of fire that scorch atmospheres.

I’m believing for new movements of prayer that result in churches being baptized afresh in the fire and power of the Holy Spirit.

I don’t know about you, but I am craving revival in the church of our nation, and we can be sure that all things will absolutely work together for good in America if the church begins groaning in the Spirit. Time is short, open your mouth and let the fire of the Holy Spirit rage through you in an other worldly language. That supernatural cry will have a sound that shakes atmospheres and brings life to the dead. You absolutely have a unique tone. It’s the tone of the groan.

Then when Mary came where Jesus was, and saw Him, she fell down at his feet, saying to Him, “Lord, if You had been here, my brother would not have died.” Therefore, when Jesus saw her weeping, and the Jews who came with her weeping, He groaned in the Spirit and was troubled … Then Jesus, again groaning in Himself, came to the tomb. It was a cave, and a stone lie against it … now when He had said these things, He cried with a loud voice, “Lazarus, come forth!” And he who had died came out …” John 11:32-44