A simple principle found in Scripture is the answer we need for the Black Lives Matter vs. the police tragedy in America.

Anger and fear are erupting in the streets of our nation, and the crisis demands a solution that transcends human common sense. We need God to step in and provide a solution. The ancient wisdom that we need is found in the book of Romans, chapter twelve.

Before we explore that passage, I want to address what I believe to be a calculated strategy of Satan in these last days. I’ve watched him execute his plan via the homosexual activism that has emerged in recent years in addition to other social movements of our day.

While it’s true that many professing Christians need to be rebuked for their heartless dealings with people who associate with certain unrighteous cultural movements, such as the homosexual community, we have to look at how the enemy is manipulating that reality. True, compassionate, loving Christians have been forced into a position of faux sympathy. Instead of standing for the timeless, non-negotiable revelation found in Scripture regarding homosexuality, we have lost our prophetic voice. Most are remaining silent instead of confronting the spirit and dogma of the age, whether it’s through homosexual activism, Black Lives Matter, abortion or other counter-biblical movements. Some are actually surrendering to this spirit and aligning with those who are deviant. Why is this? Fear.

The accusation of the enemy is that we have lost our love for homosexuals (or abortionists or other groups who oppose the truth we embrace) and we have no option but to repent and “prove” our love for these people by affirming (or at least ignoring) their positions, desires, identities and supposed freedoms. Fear is even causing people to avoid saying “Blue Lives Matter,” or “All Lives Matter,” because of accusations that such comments are bigoted.

The devil is forcing Christians to reject biblical principals and to accept his theology of universal affirmation.

Satan himself is calling for a movement of repentance! The demand is to apologize for adhering to timeless Christian truth instead of embracing his more “compassionate” religion (that positions him as god). He is calling the church to abdicate our position of Godly love in favor of a demonic affinity, affirmation and agreement with what is unholy. The enemy is forcing us into a sympathetic position.

Now the chief priests and the elders persuaded the crowd to ask for Barabbas and destroy Jesus. The governor again said to them, “Which of the two do you want me to release for you?” And they said, “Barabbas.” Pilate said to them, “Then what shall I do with Jesus who is called Christ?” They all said, “Let him be crucified!” And he said, “Why, what evil has he done?” But they shouted all the more, “Let him be crucified!” Matthew 27:20-23 (ESV)

The demonic, religious demand was to affirm and release back into society what is unholy, represented by Barabbas, while calling for the eradication of righteous standards, of holiness, represented by the Holy One himself, Jesus. The crowds responded en masse.

Woe to those who call evil good and good evil, who put darkness for light and light for darkness, who put bitter for sweet and sweet for bitter! Isaiah 5:20 (ESV)

The demand is to affirm evil and to reject good. Those who refuse, those who stand as true holy soldiers in opposition to the demands of the enemy are threatened and identified as haters. In fact, many Christians will lose their lives in the Tribulation because of this very situation. We will be marked as haters, as being in opposition to what is right and just, and will be martyred.

Today, anytime a Believer stands opposed to homosexuality, we are convincingly accused of hatred. If we oppose abortion, we are anti-woman and anti-freedom. Similarly, if we stand opposed to the rebellion that’s manifesting through the Black Lives Matter movement, we are labeled as racists who are fueled by radical hatred of African Americans.

The results are stunning. Entire Christian (actually, former Christian) denominations are now gay-affirming. They have surrendered to the enemy’s demand to “repent” and to prove their love and sympathy for those who choose to live as homosexuals. Many pastors and churches affirm the woman’s right to choose to end the life of their children. And most recently, Christians are forsaking biblical truth in favor of vengeance and anger toward our nation’s police force.

Satan, though evil through and through, is brilliant. He is duping Christians to submit to his demands for a sympathetic response of affirmation. It’s false love.

How can something so demonic and evil be embraced as loving, compassionate and true?

Satan has been masquerading as God since the beginning.

But the serpent said to the woman, “You will not surely die. For God knows that when you eat of it your eyes will be opened, and you will be like God, knowing good and evil.” Genesis 3:4-5 (ESV)

The highest (or lowest) form of demonic deception results in people being convinced his wisdom is actually good, godly and superior.

Then Herod summoned the wise men secretly and ascertained from them what time the star had appeared. And he sent them to Bethlehem, saying, “Go and search diligently for the child, and when you have found him, bring me word, that I too may come and worship him.” Matthew 2:7-8 (ESV)

Satan and those who are advancing his cause want us to believe that they are in union with God. The true motive, obviously, is not to worship God or advance his causes. Their plan is destruction and coerced allegiance to the enemy.

And Jesus answered them, “See that no one leads you astray. For many will come in my name, saying, ‘I am the Christ,’ and they will lead many astray. Matthew 24:4-5 (ESV)

Similarly many will advance deviant cultural norms and promote them as godly when in reality they will lead many astray. 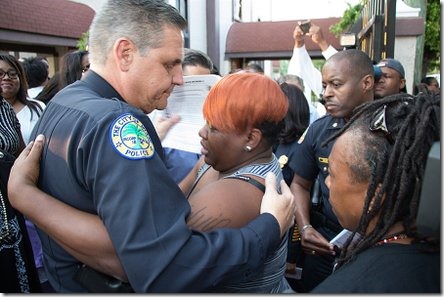 The answer is not to cower in fear of being accused of hatred, racism or lacking love. It’s to stand, in love, with true godly compassion, on the Word of God.

Currently, police shootings and the resulting uprising of the Black Lives Matter movement have the nation’s attention.

Scripture gives us a clear, simple blueprint. Is it possible for our nation to reject the demonic deception and anger that’s ripping our land to shreds in favor of true love?

Here’s the simple, powerful biblical protocol found in the Book of Romans that must prevail:

Bless those who persecute you; bless and do not curse them. Romans 12:14 (ESV)

THE POLICE AND SOCIETY:

ONGOING TRUTH FOR ALL:

…Do not be haughty, but associate with the lowly. Never be wise in your own sight. Repay no one evil for evil, but give thought to do what is honorable in the sight of all. If possible, so far as it depends on you, live peaceably with all. Beloved, never avenge yourselves, but leave it to the wrath of God, for it is written, “Vengeance is mine, I will repay, says the Lord.” To the contrary, “if your enemy is hungry, feed him; if he is thirsty, give him something to drink; for by so doing you will heap burning coals on his head.” Do not be overcome by evil, but overcome evil with good. Romans 12:16-21 (ESV)