It’s becoming rare to find prophetic voices who are calling the church into holiness.

If we truly believe in the power of the blood of Jesus we would not be anxious about focusing on—and dealing directly with—sin. 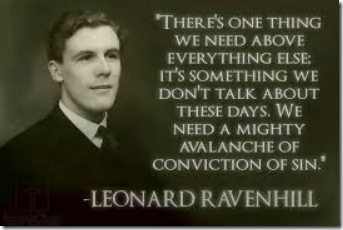 Sometimes I have to slap myself to make sure I’m not dreaming about the current state of American Christianity. It’s actually a very real nightmare. Are Christians really campaigning against holiness preaching and a radical devotion to righteous living? Yes, they really are. Calls to obedience are a threat to their faux freedom and their independent spirits.

The buzz words for those who stand opposed to a focus on holiness seem to be religious and legalism.

“When there's something in the Bible that churches don't like, they call it ‘legalism.'” – Leonard Ravenhill

Any call to renounce immorality is firmly rejected as legalism or evidence of having a religious spirit. Now, some in that camp would agree that the goal is to live a righteous life, but according to them the way to get there is to ignore sin and to focus on Jesus alone. That sounds spiritual, but it’s not biblical.

2 Wake up, and strengthen what remains and is about to die, for I have not found your works complete in the sight of my God. 3 Remember, then, what you received and heard. Keep it, and repent. If you will not wake up, I will come like a thief, and you will not know at what hour I will come against you. Revelation 3:2-3 (ESV)

Others, however, are outright proclaiming that sin is no longer an issue—that we can live freely without concern for our salvation. Instead of freedom from sin these false prophetic voices are teaching on freedom in sin.

I received an email this week from a distraught person who is in the middle of a situation in what very well may be an Ichabod church.

She was grieved, as she should be, by the casual approach to sin by the church’s pastoral staff. Foul language, except, according to them, the “F” word and using God’s name in vain, is actually celebrated from the pulpit and in practice as proof that they aren’t perfect and they aren’t religious. Joking about sexual immorality has taken place just prior to entering into worship. This was just the tip of the iceberg, but it’s enough to cause even the least discerning true Christian to be troubled.

3 But sexual immorality and all impurity or covetousness must not even be named among you, as is proper among saints. 4 Let there be no filthiness nor foolish talk nor crude joking, which are out of place, but instead let there be thanksgiving. 5 For you may be sure of this, that everyone who is sexually immoral or impure, or who is covetous (that is, an idolater), has no inheritance in the kingdom of Christ and God. 6 Let no one deceive you with empty words, for because of these things the wrath of God comes upon the sons of disobedience. 7 Therefore do not become partners with them; Ephesians 5:3-7 (ESV)

Do not allow deception to cause you to partner with those who are promoting sin and immorality! It’s time to expose the deadly darkness!

Others are trumpeting their freedom to be entertained by immorality in movies and on television. I was shocked and angered when I found myself in the middle of a thread on Facebook about R rated movies. I simply said:

If the world deems certain movies immoral by rating them R, how in the world can some Christians deem them OK? ‪#‎lukewarm‬

The uproar was stunning. Somehow it’s more immoral to call people to purity than embracing immorality itself!

RELATED ARTICLE:   Relevance: The Greatest Failure of the Church of the Last 40 Years?

Many are deceived into believing their freedom in consuming alcohol proves they are not religious. We are in the midst of a spiritual generation that is calling evil good and good evil!

Again, I’m slapping myself, shocked this issue even has to be addressed. Christians and even pastors and church leaders are minimizing the deadly power of sin, and many are playing with that serpent without realizing they are moments from destruction. When leaders endorse sin as harmless, the consequences are extreme.

6 but whoever causes one of these little ones who believe in me to sin, it would be better for him to have a great millstone fastened around his neck and to be drowned in the depth of the sea. 7 “Woe to the world for temptations to sin! For it is necessary that temptations come, but woe to the one by whom the temptation comes! Matthew 18:6-7 (ESV)

Now the sons of Eli were worthless men. They did not know the LORD. 1 Samuel 2:12 (ESV)

34 And this that shall come upon your two sons, Hophni and Phinehas, shall be the sign to you: both of them shall die on the same day. 35 And I will raise up for myself a faithful priest, who shall do according to what is in my heart and in my mind. 1 Samuel 2:34-35 (ESV)

19 Now his daughter-in-law, the wife of Phinehas, was pregnant, about to give birth. And when she heard the news that the ark of God was captured, and that her father-in-law and her husband were dead, she bowed and gave birth, for her pains came upon her. 20 And about the time of her death the women attending her said to her, “Do not be afraid, for you have borne a son.” But she did not answer or pay attention. 21 And she named the child Ichabod, saying, “The glory has departed from Israel!” because the ark of God had been captured and because of her father-in-law and her husband. 22 And she said, “The glory has departed from Israel, for the ark of God has been captured.” 1 Samuel 4:19-22 (ESV)

God is looking for faithful priests, faithful men and women of God, faithful prophetic voices who will do what is right in God’s heart and mind. The American church is at risk of having Ichabod nailed above the doorposts.

We must be sick and grieved at the state of today’s preaching. Consciousness of sin must return to our churches! Pulpits today are lulling people into slumber with soft spoken sermons devoid of anointing—or into a frenzy as they seek out enhancements to their lives.

Enough! Where are the preachers with fire burning through their veins—those who refuse to build their ministry by promising fringe benefits to those who have a mere appreciation for Jesus?

RELATED ARTICLE:   Can Christians dabble in darkness without fear?

The state of today’s preaching must be addressed with tears in our eyes and rage in our gut.

“If Jesus preached the same message minister's preach today, He would have never been crucified.” – Leonard Ravenhill

Preacher, stop forming your messages to draw a crowd and to keep people in the seats! Stop avoiding controversy! Stop worrying about who will stay or leave if you preach the Word in power!

Preach on sin! Preach on obedience! Reveal the extreme, costly lifestyle that is required if people choose to follow Jesus. I believe we should preach our churches nearly empty, leaving only a remnant—those who are true disciples.

A consciousness of sin must return to the church! We must call people to a standard of living that God has enabled—and mandated—us to adhere to. If we don’t, their blood will be on our hands.

Let’s look at the verse that many use to renounce sin consciousness:

1 For since the law has but a shadow of the good things to come instead of the true form of these realities, it can never, by the same sacrifices that are continually offered every year, make perfect those who draw near. 2 Otherwise, would they not have ceased to be offered, since the worshipers, having once been cleansed, would no longer have any consciousness of sins? 3 But in these sacrifices there is a reminder of sins every year. 4 For it is impossible for the blood of bulls and goats to take away sins. Hebrews 10:1-4 (ESV)

The truth presented here is that offering bulls and goats cannot eradicate sin. If it could, those who lived prior to the cross would have not had any consciousness of sin. It would be gone. It would have been automatic.

What the passage isn’t saying is that we are to ignore sin in the New Covenant as if it wasn’t there. It’s not saying to be unconscious to active sin in our lives.

17 then he adds, “I will remember their sins and their lawless deeds no more.” 18 Where there is forgiveness of these, there is no longer any offering for sin. Hebrews 10:17-18 (ESV)

Sin that has been covered by the blood of Jesus, the perfect offering, is eradicated. This is glorious!

RELATED ARTICLE:   Christians are being embarrassed by coronavirus

However, it doesn’t eradicate sin that we willingly embrace.

26 For if we go on sinning deliberately after receiving the knowledge of the truth, there no longer remains a sacrifice for sins, 27 but a fearful expectation of judgment, and a fury of fire that will consume the adversaries. Hebrews 10:26-27 (ESV)

We must not become numb to sin in our lives, falsely presuming that it is harmless. No, no, no! Sin that is active in the lives of anybody, Christian or heathen, puts eternities at risk.

How many conferences can we continue to have that highlight the goodies of the Kingdom while calls to repentance go silent?

We must have an awakening! The closer to Jesus we get the more we are aware of our own depravity—and it’s wonderful! It’s deep love that results in a revelation of our own sub-standard living so we can eagerly repent and fall more deeply in love with Jesus.

Jesus answered him, “If anyone loves me, he will keep my word, and my Father will love him, and we will come to him and make our home with him. John 14:23 (ESV)

And this is love, that we walk according to his commandments; this is the commandment, just as you have heard from the beginning, so that you should walk in it. 2 John 1:6 (ESV)

“You shall therefore love the LORD your God and keep his charge, his statutes, his rules, and his commandments always. Deuteronomy 11:1 (ESV)

Pastors, conference speakers, leaders, writers—please shift your message in this dire hour. Let the conviction of the Holy Spirit overtake your meetings. Allow some tears to be shed. Let the fear of the Lord overwhelm you. Awaken the sleepers. Expose the darkness. Call people to repentance in our land once again.

We can’t afford empty, soul-pleasing words in our pulpits any longer. It’s time for mighty, broken men and women of God to prophetically decree the word of the Lord with boldness.

6 Let no one deceive you with empty words, for because of these things the wrath of God comes upon the sons of disobedience. 7 Therefore do not become partners with them; 8 for at one time you were darkness, but now you are light in the Lord. Walk as children of light 9 (for the fruit of light is found in all that is good and right and true), 10 and try to discern what is pleasing to the Lord. 11 Take no part in the unfruitful works of darkness, but instead expose them. 12 For it is shameful even to speak of the things that they do in secret. 13 But when anything is exposed by the light, it becomes visible, 14 for anything that becomes visible is light. Therefore it says, “Awake, O sleeper, and arise from the dead, and Christ will shine on you.” Ephesians 5:6-14 (ESV)