Read a BRAND NEW ebook for ONLY $2.99: UNOFFENDABLE: How to Break Free from the Prison of Offense 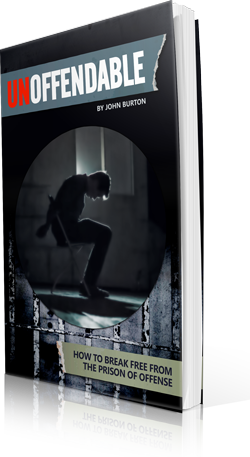 This powerful teaching is a part of my book Carry Like Mary. The moment you grasp the revelation that you are a carrier of God, everything changes. You will begin to move into uncharted territory and unquestionably will begin to touch some religious idols that others hold dear.

Additionally, you will become a threat to the darkness, and the ruler of that realm will unleash his most strategic military campaigns against you. One of his most effective attacks is offense. He will go to great lengths to shatter your soft heart of love through the attitudes and verbal violence of those you are called to lay your life down for.

The greater the mission, the greater the opportunity for offense. Can you imagine how Mary must have felt? She was called to steward the greatest mission in history by delivering Jesus, while, most certainly, being assaulted left and right by those who disapproved of her pregnancy.

People will disapprove of your supernatural pregnancy. As a carrier of God, you will draw criticism and will regularly be targeted because of what you carry-who you carry. The nuclear power within you is an extreme threat both to the kingdom of darkness and the status quo of the church. Be sure, you will draw attack from all sides. The spirit of abortion that's so vicious in our nation is killing more than precious babies. It's attempting to neutralize and eliminate any threat of God being delivered through you.

It's that attack that you must be aware of. You must guard your heart and be very sure that you are not offended when other people assault you.

(You can read this and ANY Kindle book on your PC, laptop, tablet or phone! You don’t need a Kindle device.)

God has a new heart for us that cannot be offended, an “unoffendable” heart. Beloved, possessing an unoffendable heart is not an option or a luxury; it's not a little thing. Consider: Jesus warns that, as we near the end of the age, a majority of people will be offended to such a degree that they fall away from the faith.

I have been casting a very costly vision for revival in Detroit. I have a great friend in Ireland who was with me in Colorado Springs when Secret Prayer was functioning. Like we are beginning to do now in Detroit, we prayed in a different church every Friday night in Colorado Springs from 10pm to midnight. It was a powerful movement. Strangely, after dealing with the topic of offense the last few days here, my friend just so happened to mention it as he was encouraging me in this new city prayer strategy:

Expect a good offended carnal Christian sorcerer's curse to fly your way, but just cancel it and move on. If they're really seeking God's power, they'll eventually repent and come back. If they don't then they're not seeing themselves properly within the context of the Body at large, and won't be able to support the necessary ministry to the whole body that the Spirit's going to stir up.

Offense is one of the primary issues that pulls people out of position. It’s a very serious issue. When the challenge increases, when the prophetic message strikes a nerve, a soft heart will respond in joy while an offended heart will often respond quite differently. A prophetic call is actually holy communication, it’s a message that has attached to it the expectation of response.

What often happens first when a heart is offended is that the enemy will fight this call to action, this holy communication, with silence. Dialogue, discussion, prophetic response, revelation, etc. will cease as it gives way to an underground movement of murmuring. The Absalom spirit is often awakened right at this point.

Of course, silence isn’t always indicative of offense taking root. Some people are simply wired differently, or are slower to respond, or need additional time to process the call. However, I do believe you can look at the broader picture and if the large scale communication drops at the point of prophetic communication, it would do you well to gather the intercessors and to pray against that spirit.

There is a desperate cry from a remnant for the bar to be raised, for the prophets to step up and unapologetically call the body to the cross and into a culture crashing reality. Just today, someone said to me (slight paraphrase), “John, you just have to go! Lead in the fullness of your mandate, you have to be released and not held back.”

I want to exhort you to move with great passion, from a place of extreme challenge and full of the Spirit of God. To continue doing what we have been doing while expecting a different result is insanity. We must have reformation in the structure of the church—and the cost will rock us to our very core.

Definition of a prophetic movement: People who are uniquely called as spokesmen for a cause; advocates; a vehicle to advance a movement