Operation Babel: A prophetic strategy to break the power of the homosexual spirit

God opened up a powerful strategy to disrupt the momentum of the homosexual agenda to me—and a successful campaign will result in innumerable people set free. 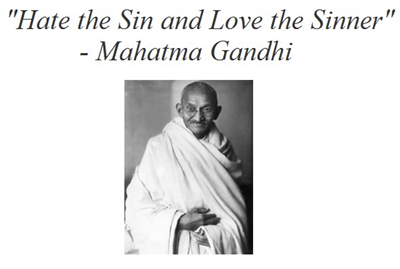 Love the sinner, hate the sin.

Is this really the limit of our wisdom?

I’m sure the LGBT community is sick, bored and tired of that defense—and I am too.

It offers no strategic plan of action and it reveals that we have exhausted our arguments. After loving the sinner and hating the sin, where does that leave us? What do we do?

That statement, love the sinner and hate the sin, really needs to be retired.

In fact, it was made famous by someone who wasn’t even a Believer in Jesus—Gandhi.

As I was considering this in prayer, God suddenly and powerfully revealed a clear, easy to understand strategy that will, without question, stop the fast moving gay agenda in its tracks.

The church just has to make it happen. Spoiler alert: We have to pray, in unity, with one language, in the Holy Spirit.

The gay agenda is driven by a spirit. We must keep this in mind. Of course, we don’t wrestle with people. We wrestle with unholy spirits. But, it’s true that many people are in alliance with those very spirits that we are battling, so it’s unfortunately common for there to be collateral damage. Don’t mistake that collateral damage with fighting against flesh and blood. When we deal with evil spirits, those who renounce them will be set free while those who embrace them will experience their judgment.

Pray that the Holy Spirit draws many to renounce the spirits that are holding them captive as this massive strategy that I’m calling Operation Babel unfolds.

Maybe we need to advance our plan from “love the sinner, hate the sin” to “fight the spirit, free the person.” 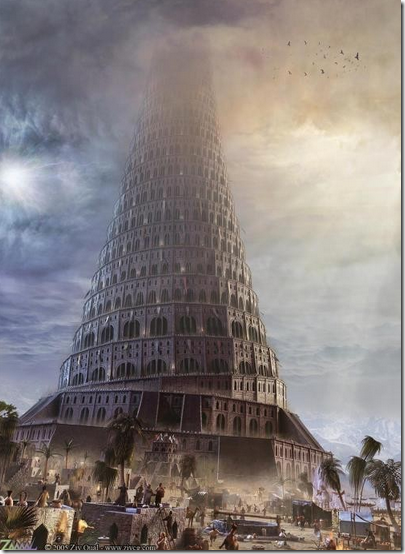 Now the whole earth had one language and the same words. Genesis 11:1

Unity. If Christians grasped the power of true unity, around a common holy purpose, we’d see unstoppable advance. The Kingdom of God would move in the power and at the speed of lightning.

All the believers were one in heart and mind. Acts 4:32

…so that with one heart and mouth you may glorify the God and Father of our Lord Jesus Christ. Romans 15:6

Unfortunately, the church is lacking in unity (and I’m not talking about ecumenical affinity). We must immediately unify around the upper room of fervent prayer.

Today’s homosexual movement is possibly the most unified on the Earth. They have one language and one purpose. Everybody is in agreement and they are infiltrating with the intention of leading every segment of society.

They have one purpose and will give their power and authority to the beast. Revelation 17:13

Today’s unity in the homosexual movement is what we must address now.

And as people migrated from the east, they found a plain in the land of Shinar and settled there. And they said to one another, “Come, let us make bricks, and burn them thoroughly.” And they had brick for stone, and bitumen for mortar. Genesis 11:2-3

Bricks are representative of human efforts to build their own kingdoms. Remember Egypt? The Hebrews were required to make bricks so Pharaoh could continue to build his empire.

That same day Pharaoh gave this order to the slave drivers and foremen in charge of the people: “You are no longer to supply the people with straw for making bricks; let them go and gather their own straw. Exodus 5:6-7

Today there is a mass movement of brick making.

Individual bricks, when put together, will result in a mighty city and a mighty tower.

The bricks of legislation and gay friendly government policies are being made a record pace. Bricks carefully made by human hands can be seen in a variety of places such as gay pride parades, gay friendly curriculum in schools, the advance of gay marriage from state to state, entertainment and media, marketing campaigns and through the influence of major brands. Each brick is resulting in greater affirmation of this unholy movement.

Additionally, as with Pharaoh and the Hebrews, there is intense pressure today on Christians to actually make the bricks!

Pharaoh forced God’s people to make bricks for him, and today’s homosexual movement is attempting to force God’s people today to do the same thing. Christian bakers are being forced to make wedding cakes for gay weddings. The threat of forcing Christian pastors to marry homosexuals is just over the horizon. This evil spirit is bent on commanding Christians to agree with and actually promote his plan of destruction!

Just as the bricks were baked thoroughly at Babel, there is a thorough, well thought out process of brick making in play now that will, if we don’t step up, result in an evil city and tower being built.

Then they said, “Come, let us build ourselves a city and a tower with its top in the heavens… Genesis 11:4a

The goal then was to take dominion, and that’s the goal now.

The city represents the plan to spread horizontally around the world—to see homosexuality become not only accepted, but the primary leader of humanity. This spirit doesn’t simply want to be affirmed—it wants to dominate.

The tower represents a connection with Heaven. The “gay Christian” movement is moving at the speed of light—and even the most biblically sound arguments against it are not convincing those who are seduced by this spirit. The unity is too strong and the response of the church has been too weak.

This simultaneous horizontal and vertical advance of the homosexual movement is brilliant, though not original. We saw it at Babel, and we’ll see it again at the end of the age. The Antichrist’s strategy includes horizontal world domination and a vertical one world religion. At the end of that strategy, after a great battle, God wins. God is primed to win this battle today as well—but the church must fight from a place of humility, love and prayer.

But the beast was captured, and with him the false prophet who had performed the miraculous signs on his behalf. With these signs he had deluded those who had received the mark of the beast and worshiped his image. The two of them were thrown alive into the fiery lake of burning sulfur. Revelation 19:20

…and let us make a name for ourselves, lest we be dispersed over the face of the whole earth.” Genesis 11:4b

Pride. The flood of Noah was a much nearer reality to them than it is to us today, and they weren’t about to let their destruction happen again. They were determined to grow in strength through radical unity and to defy God through pride. They wanted to make a name for themselves. This is a Luciferian spirit that, in pride, seeks to rise to the heavens.

“How you are fallen from heaven, O Day Star, son of Dawn! How you are cut down to the ground, you who laid the nations low! You said in your heart, ‘I will ascend to heaven; above the stars of God I will set my throne on high; I will sit on the mount of assembly in the far reaches of the north; I will ascend above the heights of the clouds; I will make myself like the Most High.’ Isaiah 14:12-14

Identity. We can see how successful the enemy has been just by how many are absolutely convinced their homosexuality is core to their identity. The argument is that they were born that way. It’s the defining mark of who they are as a person, and they are proud of that.

I’ve argued before that I don’t believe the primary driver of homosexuality is lust—it’s identity. When personal desires and experiences are grafted in at the level of identity, the enemy has won a primary battle. When he has won that battle with many people, a movement around that very personal and overpowering identity results. That nearly unstoppable unified advance is what we are dealing with today.

And the LORD came down to see the city and the tower, which the children of man had built. Genesis 11:5

God is not absent. He is watching and he is ready to move. His desire, which is so much stronger than ours, is for freedom. For life. He wants the movement stopped and he wants its influence marginalized.

And the LORD said, “Behold, they are one people, and they have all one language, and this is only the beginning of what they will do… Genesis 11:6a

Again, their unity and their common language is all it took to advance in strength. Spoiler alert: Are you noticing an Acts 2 strategy?

This very simple strategy of unity and common language is also driving today’s homosexual agenda. They are agreed in identity and are saying the same things. Their resulting pride gives them great strength.

There is a great threat today as well. The demonic spirit behind the homosexual camp has much more planned than promoting equal rights. He is intently focused on destruction.

…And nothing that they propose to do will now be impossible for them. Genesis 11:6b

Their options were limitless. Their unity resulted in strength and capability beyond anything that had ever existed among men. 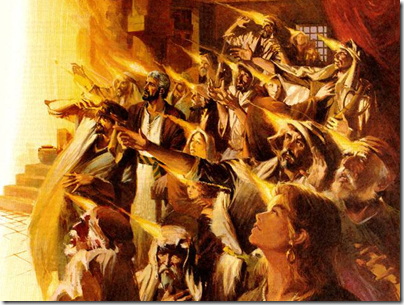 Come, let us go down and there confuse their language, so that they may not understand one another’s speech.” Genesis 11:7

Confusion in the camp. That’s the plan.

The inability to communicate and the existence of confusion will stop the most advanced, aggressive and powerful movements.

In a moment, the movement ceased.

Did you notice a similarity between the enemy’s strategy of unity and common language to a well known strategy of God?

And when the day of Pentecost was fully come, they were all with one accord in one place. Acts 2:1

They were unified and together—and confusion was eliminated as the language barrier (that God created in Genesis 11) was overcome!

And they were all filled with the Holy Ghost, and began to speak with other tongues, as the Spirit gave them utterance. And there were dwelling at Jerusalem Jews, devout men, out of every nation under heaven. Now when this was noised abroad, the multitude came together, and were confounded, because that every man heard them speak in his own language. Acts 2:4-6

Simply stated, we must have a movement of Holy Ghost infused intercession. A mass advance of people praying in tongues is non-negotiable if we hope to move ahead in great unity. As we do this, we will stand in powerful agreement and pray for confusion to come to the enemy’s camp—so the millions of slaves held there can drop their bricks and be free.

The stories of Babel and the Exodus have key parallels.

The confusion at Babel and the plagues at Egypt got the job done.

Some will radically reject God at that time and be dispersed while others will fall in love with Jesus and move out of slavery and into the glorious encounter.

Pray for God to continue to raise up mighty men and women of God in the spirit of Moses to deliver people from horrific bondage.

Pray for God himself to come down and bring confusion to the homosexual movement.

Pray for the church, in a spirit of passionate love, to gather together in fervent, Holy Spirit driven intercession.

It truly is a prayer movement that will see this unholy tower dismantled.