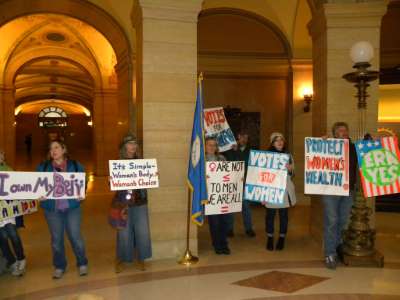 A new religion has been born and the liberal left is crafting its unholy bible.

I shouldn't be shocked at what I see coming from the left anymore. Outraged, disturbed, saddened and often embarrassed for our nation, yes. But shocked? No. I've come to believe that a delusion is settling over much of the nation, a spiritual confusion that results in people legitimately thinking wrong is right and evil is good. The twisting of reality and truth has reached levels possibly never seen before on the earth. It's as if a large and influential segment of society has been seduced and drugged by some demonic, supernatural concoction. Can you believe The U.S. Sun, among many other publications is actually reporting this comment by Congresswoman Cori Bush? “Trans people give birth. Gender non-conforming people give birth. I identify as a mother, but not every person who gives birth identifies as one.” “Everything I do is rooted in love, a love that means that everyone’s identity is respected, welcomed, and celebrated,” she added. The controversy? Instead of celebrating mothers on Mother's Day, Cori promoted the idea of “birthing people.” Delusion. Not only is it delusional, it's unbelievably offensive to women. They are being dehumanized, erased and cancelled. Greta Van Susteren writes, “To all those who reject the term “Mother’s Day” in favor of “birthing persons’ day” you have just slighted all the incredible mothers who adopted children.” The left can't even define what a woman is today. They are confused over the most basic and obvious scientific facts such as what defines a male and a female. Many are abandoning the term “breastfeeding” in favor of “chestfeeding.” Our nation is going mad and those who are actually sane and in their right minds are being demonized. La Leche League Canada states, “We proudly support every breastfeeding and chestfeeding family under the rainbow.” Even my spellcheck believes chestfeeding to be an error. I wrote long ago that future generations will look back on America in the early 2000's and laugh, mock and wince due to the embarrassment they are feeling for us. In a matter of a few short years, mankind has truly highlighted what it looks like to live without God, and quite often radically opposed to him.

Make no mistake, the left is forming a new religion. As we watch it play out it's clear they are etching out their own version of commandments in their worship of the god of woke. Thou shalt be inclusive. If not, though shalt be cancelled. They are attempting to create a new morality. We've seen the attempt to redefine love (all while most of the church refused to push back). Cori Bush said, “Everything I do is rooted in love…” Unfortunately, it's impossible to truly love without a vibrant, surrendered devotion to Jesus. God is love. Just as Lucifer's jealously and pride resulted in his attempt to become a god himself, the god of woke (just another manifestation of Lucifer) is endeavoring to be worshiped as the god of true, redefined love. Of course he'll never fully succeed, but he's doing a heck of a job gathering his disciples and forming his religion. Wokeness as a religion campaigns as a ministry of love, but the moment you fail their morality test, the serpent's fangs come out and strike with a vengeance. There is no forgiveness in the religion of woke. No second chances. No tenderness. No kindness. No humility. And no love. The church of woke promotes people worship by affirming anything and everything that someone believes in if it feels good and doesn't “hurt” others. Well, anything and everything except that which contradicts their standards and values. A quick study of the Church of Satan makes you wonder if the church of woke may be borrowing from their creed: “…we can offer love to those who deserve it and deliver our wrath (within reasonable limits) upon those who seek to cause us—or that which we cherish—harm.” The system of punishment for the church of woke includes destruction of people, their families, their livelihoods, their reputations and all they hold dear. This extermination, or “cancelling” has infiltrated our culture as the spirit of fear and destruction, not love and forgiveness, is unleashed on all who dare cross them. Attempts to destroy Supreme Court justices Brett Kavanaugh and Amy Coney Barrett were unlike anything our nation has ever seen, simply because they held to a belief system that threatened the liberal left. Actress Gina Carano was fired by Disney for likening censorship of conservatives to Nazi Germany. President's Lincoln and Washington's names have been attempted to be erased from American history. The police have been demonized, defunded and decried, and crime is soaring. Comedians are afraid to be funny. “I think it is a scary time to be a comedian because there are so many crazy people in the world,” comedian Nicky Paris said. One wrong joke or tweet, and funny could get you fired. “I have a brother with special needs and I’ve watched somebody struggle their entire life to just do every day things that anybody else would be able to do. He loves when I make fun of him. I have so many jokes about him and a lot of ways, it’s healing. I’m a firm believer that if you can talk about something and make a joke about it you can get through it. It makes you stronger than whatever you’re going through,” Paris said. Nope, we can't make lighthearted fun of people anymore. Comedy has been cancelled. Ironically, liberal Bill Maher said: “I don't want to live in a world where liberals are the uptight ones,” he said. “Once upon a time, the right were the ones offended by everything. They were the party of speech codes and blacklists and moral panics and demanding some TV show had to go. “Well, now that's us,” a disgusted Maher said. “We're the fun-suckers now.

THIS IS A SPIRITUAL SITUATION

“…they refused to love the truth and so be saved. Therefore God sends them a strong delusion, so that they may believe what is false,” (2 Thessalonians 2:10–11, ESV) “And since they did not see fit to acknowledge God, God gave them up to a debased mind to do what ought not to be done.” (Romans 1:28, ESV)

For blood-bought Christians it should be obvious: we aren't fighting against flesh and blood. The war is against principalities, powers, rulers of the darkness of this world and spiritual wickedness in high places (Ephesians 6:12). A failure to understand this elementary truth is a key reason why the spirit of the age is raging and the wicked principles of the left are having impact. The spiritual principles of the church of woke must be confronted with the Spirit of truth. Spiritual warfare must be waged as the battle exists in the invisible realm. What is birthed and nurtured in the spirit will ultimately manifest naturally. This is true both positively and negatively. If we live and walk and pray in the Spirit, and live holy lives as the Spirit of God empowers us, our natural lives will be testimonies of God's miraculous power and grace. And, those who live in darkness will see their alliance with wicked supernatural beings manifest in their daily lives. On a larger scale, this is what we are seeing with the bizarre happenings in the world today. Pro-science people (as liberals often refer to themselves as) being confused over the simplicity of gender, mothers, breastfeeding and many other seemingly easy to understand topics is evidence of this. For people who stand firm on the altar of science to do an about-face and refute the most basic and clear scientific truths settles it. A delusion has visited our nation. This is why we must have movements of fiery, fervent intercession arise in our nation. Revival is truly our only answer. A massive outpouring of God that will remove blinders, send demons fleeing and return people to their right minds is our only hope. Understand, we are to love our enemies. While we can and should bring attention to destructive paradigms like the woke left promotes, we aren't fighting against them. We pray for them and reveal what true love actually looks like. We war for their souls. We weep and rend our hearts over their eternities. We need a holy army to arise, not to prove the left wrong but to set the captives free. Photo credit: “Minnesotans Unite Against the War on Women in the capitol building” by Fibonacci Blue is licensed under CC BY 2.0 Originally published by The Stream.
Posted in Uncategorized and tagged amy coney barrett, bill maher, birthing people, brett kavanaugh, cancel culture, chestfeeding, comedy, cori bush, gina carano, left, liberal, religion, woke
Leave a comment