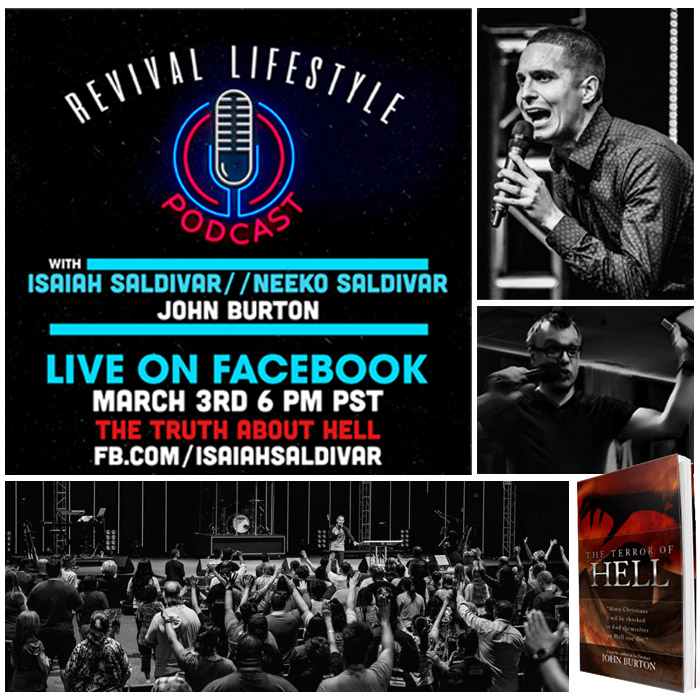 At 6pm PST (8pm CST) on Tuesday, March 3rd go to fb.com/isaiahsalvidar and lock in for a night of FIRE! John, Isaiah and Neeko will be talking about the sobering realities of Hell…realities that have been dismissed and minimized if not fully renounced by pastors all over the world.
Posted in Podcast, Revival and tagged eternity, facebook, hell, isaiah saldivar, livestream, revival
Leave a comment

Here are the notes for TONIGHT’S teaching on Prophetic Messengers

If you stumble across this after the fact, go to http://media.johnburton.net and search for the first teaching in the series Prophetic Messengers!

If you are within 100 miles of Detroit—LEAVE HOME NOW and join us! The fire of God is all over me! Tonight is going to be significant.

**After the notes, I will include info about joining our leadership team at the Detroit Prayer Furnace. We are seeking 40+ people who will give leadership to the prayer movement!

i.      This means you! You are a prophetic messenger! You declare truth!

iii.      The church is silent. Christians are posting sweet nothings on Facebook when we must be provoking and awakening a numb church that has no sense of spiritual violence and is little threat to the enemy.

v.      Joe Sazyc: Prophets are always victims of those who didn't like their message.

1.       The impact you have may not draw the people you want to you. It will probably repel people you care about from you. But you WILL have impact!

2.       Some friends and family will probably cut off relationship with you!

vii.      Luke 14:25-28 (ESV) 25 Now great crowds accompanied him, and he turned and said to them, 26 “If anyone comes to me and does not hate his own father and mother and wife and children and brothers and sisters, yes, and even his own life, he cannot be my disciple. 27 Whoever does not bear his own cross and come after me cannot be my disciple. 28 For which of you, desiring to build a tower, does not first sit down and count the cost, whether he has enough to complete it?

2.       Scofield: All terms which define the emotions or affections are comparative. Natural affection is to be, as compared with the believer's devotedness to Christ, as if it were hate.

a.       We must proclaim truth knowing that it will absolutely enrage people you love! It is for their freedom!

b.      “No amount of false teaching will be able to widen the narrow road.”

c.       “Not being on time is saying your time is more important than someone else's.”

d.      “God cannot trust you with a stage if you struggle to show up to church on time.”

e.      “Don't envy those who God promotes and expect a promotion.”

f.        “We have lost the spirit of conviction due to fear of condemning people.”

g.       “I know countless people who preach on revival and awakening. I know few who are willing to pay the price.”

h.      “If your revelation of joy is laughter in church you have sold yourself short.”

i.         “We should be more sensitive to how the Holy Spirit feels than how people feel.”

j.        “If we were really sensitive to seekers our services would be longer not shorter.”

m.    “It would be interesting to see people express their opinions in real life and not just behind a keyboard.”

viii.      Messengers arise! Get the word of the Lord hour after hour! Burn! And shout those messages from the rooftops!

ix.      With the situation in Syria upon us, we have no option but to open our mouths!

1.       Saw a vision of a sudden Revolutionary War…a shaking that provoked the people who were working in their fields to pick up their guns and fight.

3.       You have the authority to DEMAND COMPLIANCE and to decree order!

a.       Jeremiah 1:4-10 (ESV) 4 Now the word of the LORD came to me, saying, 5 “Before I formed you in the womb I knew you, and before you were born I consecrated you; I appointed you a prophet to the nations.” 6 Then I said, “Ah, Lord GOD! Behold, I do not know how to speak, for I am only a youth.” 7 But the LORD said to me, “Do not say, ‘I am only a youth’; for to all to whom I send you, you shall go, and whatever I command you, you shall speak. 8 Do not be afraid of them, for I am with you to deliver you, declares the LORD.” 9 Then the LORD put out his hand and touched my mouth. And the LORD said to me, “Behold, I have put my words in your mouth. 10 See, I have set you this day over nations and over kingdoms, to pluck up and to break down, to destroy and to overthrow, to build and to plant.”

2.       The prophetic atmosphere must skyrocket!

2.       Do you participate in church or ministry due to assignment or opportunity?

3.       Your answer will determine your readiness.

iv.      Number Four: We will speak what the Lord commands us to

vi.      Number Six: God has touched our mouths and appointed us over nations!

i.      Dake: A staff for striking, made from an almond tree. Here it symbolizes a watchman, a vigilant officer looking for the invasion of Judah by Babylon.

iv.      His Words are being delivered…are you receiving them?

v.      ESV Study Bible : Jeremiah can expect that when he speaks God’s words, the words will come true.

ii.      Boiling pot: An Oriental symbol of a raging war.

c.       For behold, I am calling all the tribes of the kingdoms of the north, declares the LORD, and they shall come, and every one shall set his throne at the entrance of the gates of Jerusalem, against all its walls all around and against all the cities of Judah.

i.      God so loved his people that their rebellion put his eternity with them at risk.

ii.      If God’s methods of allowing enemies of his people to attack were valid then, certainly it’s valid now.

iii.      It’s interesting that God sent enemies to the gates.

3.       Rick Warzywak: The Lord is supernaturally rousing intercessors and watchmen from their sleep and giving them the charge to fulfill their calling to stand alert and serve as “early warning systems” in the spirit.

4.       James Goll: We urged our state leaders to call their states to focused prayer over ports and naval bases, including Annapolis, and the eastern gate of the US.

5.       Cindy Jacobs: It is clear that we are in need of better “intelligence,” greater clarity, and the need for those who stand guard over our nation to be awake and alert. This is not a time to be asleep, confused or distracted!

6.       Cindy Jacobs: Please agree with us in prayer and continue to decree a supernatural watchman anointing over our intelligence community, border agents, customs, the coast guard, the military, and police, in particular for those who stand guard over our ports along the eastern seaboard. In addition to this, please pray for the peace of Jerusalem, and that war would be averted in the Arab world.

7.       Cindy Williams: I'm looking at the earthquake world map. I studied this area for a year, so am a little familiar with what it normally looks like and it's trends so what caught my eye today was that ALL the major plates have been shaking and are 6.0 or 6.6  (number of man).

d.      16 And I will declare my judgments against them, for all their evil in forsaking me. They have made offerings to other gods and worshiped the works of their own hands.

i.      Dake: God always makes the reasons for His judgments clear, in time for men to avoid them if they will listen. Four reasons for judgment here:

ii.      Ephesians 5:3-17 (ESV) 3 But sexual immorality and all impurity or covetousness must not even be named among you, as is proper among saints. 4 Let there be no filthiness nor foolish talk nor crude joking, which are out of place, but instead let there be thanksgiving. 5 For you may be sure of this, that everyone who is sexually immoral or impure, or who is covetous (that is, an idolater), has no inheritance in the kingdom of Christ and God. 6 Let no one deceive you with empty words, for because of these things the wrath of God comes upon the sons of disobedience. 7 Therefore do not become partners with them; 8 for at one time you were darkness, but now you are light in the Lord. Walk as children of light 9 (for the fruit of light is found in all that is good and right and true), 10 and try to discern what is pleasing to the Lord. 11 Take no part in the unfruitful works of darkness, but instead expose them. [THIS IS HUGE! WE MUST EXPOSE DARKNESS!] 12 For it is shameful even to speak of the things that they do in secret. 13 But when anything is exposed by the light, it becomes visible, 14 for anything that becomes visible is light. Therefore it says, “Awake, O sleeper, and arise from the dead, and Christ will shine on you.” 15 Look carefully then how you walk, not as unwise but as wise, 16 making the best use of the time, because the days are evil. 17 Therefore do not be foolish, but understand what the will of the Lord is.

e.      Jer 1:17 But you, dress yourself for work; arise, and say to them everything that I command you. Do not be dismayed by them, lest I dismay you before them.

ii.      It’s about the assignment not the opportunity!

f.        18 And I, behold, I make you this day a fortified city, an iron pillar, and bronze walls, against the whole land, against the kings of Judah, its officials, its priests, and the people of the land. 19 They will fight against you, but they shall not prevail against you, for I am with you, declares the LORD, to deliver you.”

i.      God is purging, purifying, and he will prevail if we aren’t dismayed!

JOIN THE CORE AT THE DETROIT PRAYER FURNACE 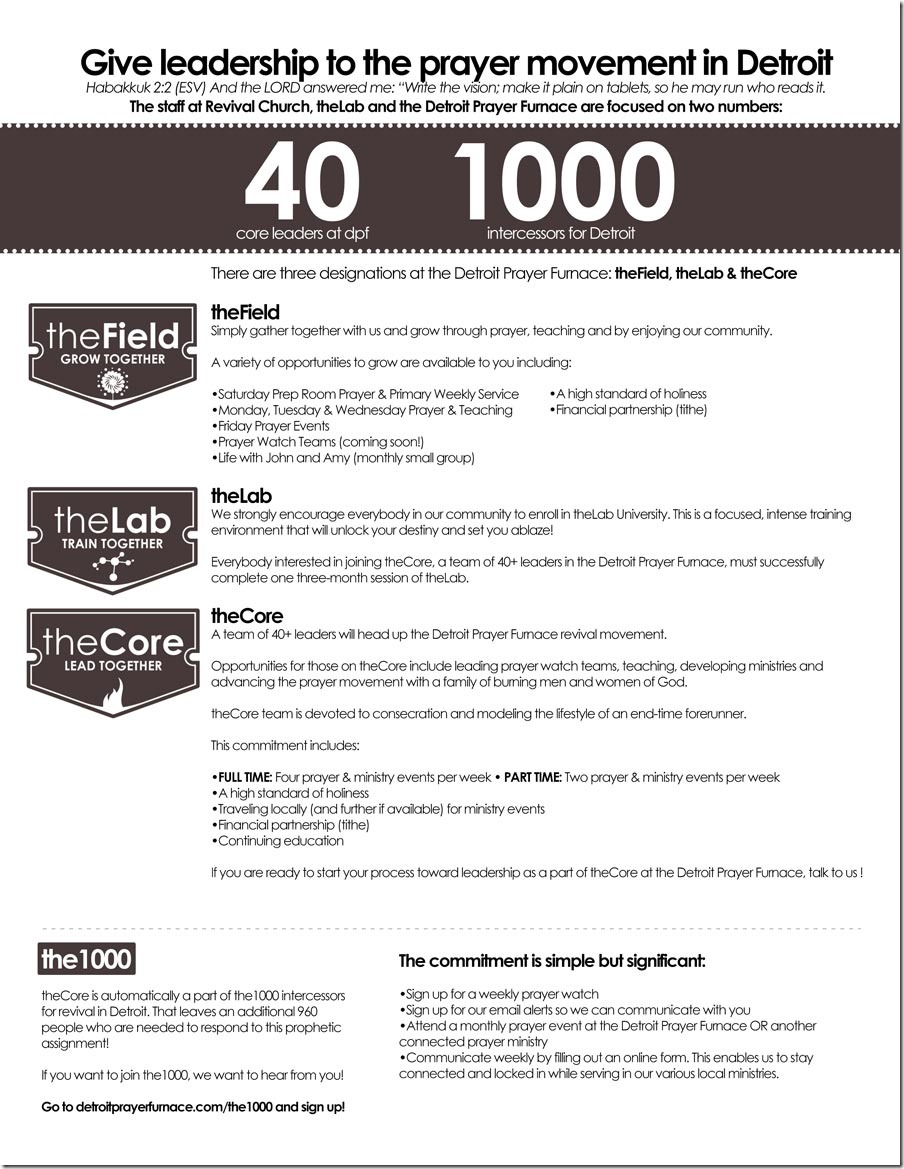