I preached my last message at Revival Church last night—and it’s a MUST WATCH!

Last night’s service and message were intense from beginning to end. BY ALL MEANS watch my last message at Revival Church. 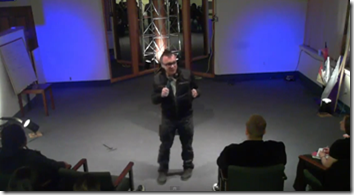 I discuss the critical call for the remnant to prepare for a shock to the church and to the earth.

Will American Christianity finally rid itself of a casual approach? Will we reject an independent spirit? Will we pray continually or just focus on nice church services?

It’s time for fire to erupt! That fire must explode out of God’s remnant people who are ready for massive change—a shift that will result in the old model of church giving way to an extreme, demanding and troubling new wineskin.

I bless Detroit as I move on to Branson, Missouri. Amy Smith has been prepared for such a time as this and I’m excited about her continuing leadership at Revival Church!

Join her and the team of passionate warriors every Saturday at 7pm!

8. Leonard Ravenhill: “In a day of faceless politicians and voiceless preachers, there is not a more urgent national need than that we cry to God for a prophet! The function of the prophet, as Austin Sparks once said, “has almost always been that of recovery”. The prophet is God’s detective seeking for lost spiritual treasures. The degree of his effectiveness is determined by the measure of his unpopularity. Compromise is not known to him. He has no price tags. He is totally “otherworldly”. He is unquestionably controversial and unpardonably hostile. He marches to another drummer!”

b. The word came to Jeremiah concerning all the people of Judah in the fourth year of Jehoiakim son of Josiah king of Judah, which was the first year of Nebuchadnezzar king of Babylon.  So Jeremiah the prophet said to all the people of Judah and to all those living in Jerusalem:  For twenty-three years–from the thirteenth year of Josiah son of Amon king of Judah until this very day–the word of the LORD has come to me and I have spoken to you again and again, but you have not listened. Jeremiah 25:1-3

c. And though the LORD has sent all his servants the prophets to you again and again, you have not listened or paid any attention.  They said, “Turn now, each of you, from your evil ways and your evil practices, and you can stay in the land the LORD gave to you and your fathers for ever and ever.  Do not follow other gods to serve and worship them; do not provoke me to anger with what your hands have made. Then I will not harm you.”  “But you did not listen to me,” declares the LORD, “and you have provoked me with what your hands have made, and you have brought harm to yourselves.” Jeremiah 25:4-7

b. “Before I formed you in the womb I knew you, before you were born I set you apart; I appointed you as a prophet to the nations.” Jeremiah 1:5

c. “Ah, Sovereign LORD,” I said, “I do not know how to speak; I am only a child.”  But the LORD said to me, “Do not say, ‘I am only a child.' You must go to everyone I send you to and say whatever I command you.  Do not be afraid of them, for I am with you and will rescue you,” declares the LORD.  Then the LORD reached out his hand and touched my mouth and said to me, “Now, I have put my words in your mouth.  See, today I appoint you over nations and kingdoms to uproot and tear down, to destroy and overthrow, to build and to plant.” Jeremiah 1:6-10