Pray for Bruce (not Caitlyn) Jenner. If we don’t discover who we are in Christ, and who Christ is in us, a crisis is all we can expect. 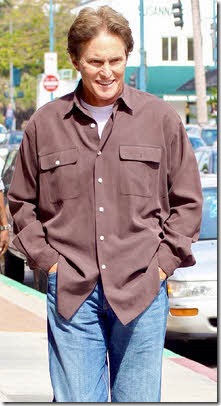 It’s easy to read about Bruce Jenner’s transition away from his God-given gender identity and experience a range of thoughts and emotions: sadness, compassion, anger, disgust, confusion

Certainly the appropriate reactions for blood-bought Christians should include intense intercession for Bruce, thankfulness for God’s power to keep us free from the enemy’s assaults in our lives and prayer for a better understanding of the issue of identity. Every one of us is at risk of losing our grip on our own identity if we don’t understand who we are in Christ and who Christ is in us.

Galatians 2:20 (ESV) 20 I have been crucified with Christ. It is no longer I who live, but Christ who lives in me. And the life I now live in the flesh I live by faith in the Son of God, who loved me and gave himself for me.

The answer to finding ourselves is to lose ourselves—to die. The old is to pass away so the new can come.

2 Corinthians 5:17 (ESV) 17 Therefore, if anyone is in Christ, he is a new creation. The old has passed away; behold, the new has come.

THE PURSUIT OF IDENTITY

Any youth pastor will tell you the issue of identity confusion, whether it’s gender based or not, is not unusual. Young people are famous for attempting to find and express their “true selves” by altering their bodies through tattoos, piercings, funky hair colors and various other methods. Of course, it’s not the outward manifestation that’s concerning. It’s the despair within that’s resulting in gasping for validation.

They are also experimenting with alternate sexual experiences, exhibiting attitudes of independence and becoming more narcissistic than possibly any generation in history. They are looking for life that makes sense and truly has meaning.

The problem? Without dying to self we can never discover our true identity.

Without Jesus, Bruce Jenner is hopeless—regardless of whether he struggles with gender identity or not. Eternity is a small and rapidly decreasing number of heartbeats away and he will live, as Bruce Jenner, not Caitlyn, for trillions of years (forever) in horrifying, unending torment—a never ending panic attack.

The same is true for every person who has ever lived on the earth. For those who don’t radically, completely die to their own pursuits and their own selfish identities and decide to make Jesus Christ the supreme loving master of their lives, Hell is their future. This is truth. This is terror.

However, the glorious promise for Bruce and everyone is that we can die to our flesh and experience a sudden invasion of love, freedom and clarity about the identity of Christ—and how that brings the definition to our own identity that is so fleeting without God.

With the increasing hostility toward God in our culture, people’s only remaining hope is to discover self through the magnification of their own desires and inclinations.

This confusion is being celebrated today with exuberance.

How often have you heard about a married man realizing that he is gay—and then leaving his marriage and his children to live life as he was “created to?” Increasingly that man is celebrated for having the courage to “come out” and live how he was supposedly designed to.

Our culture is becoming increasingly nonsensical.

This confusion is leading people to attempt resolution to past sins and struggles in some of the most extreme and bizarre ways. The enemy is most definitely stealing, killing and destroying in unprecedented fashion.

After admitting mistakes as a husband and father Bruce Jenner said, “I have high hopes that Caitlyn is a better person than Bruce. I’m very much looking forward to that.”

He is hoping that a transformation into a new identity—his true identity—can bring healing and strength. He is right. However, the transition isn’t from Bruce to Caitlyn or from man to woman. It’s from old man to new. His only hope is Jesus.

His announcement that he is changing his gender identification shouldn’t bring a celebration. His confusion is heart wrenching—and all of us who have been at one time dead in our sins (which is all of us) should relate to it.

The answer isn’t to encourage and celebrate a humanistic adventure of self discovery. That will only lead to hopelessness and increased despair, even if it brings a short lived respite.

Bruce Jenner, talking about how people didn’t understand what he was going through even at the height of his Olympic success: “Little did they know I was totally empty inside.”

He then continues to share why he decided to go through with his gender transition: “I’m not doing this to be interesting. I’m doing this to live.”

Bruce’s answer is not in becoming a woman in the hopes of starting over. It’s in allowing Jesus to forgive him and heal his past wounds. True peace can be his!

Romans 5:1 (ESV) 1 Therefore, since we have been justified by faith, we have peace with God through our Lord Jesus Christ.

Without Jesus Bruce Jenner will always experience desperation. He freely admits he has been in trauma for decades.

How is it that such emptiness can dominate a person’s life for so long and Jesus is never invited in?

I’m not only talking about Bruce’s terribly sad situation. Countless others, including Christians, live every day in depression, despair, confusion, bondage to sin and powerlessness. All too often they turn to self-discovery methods and desire satisfaction in the hopes that they can find life. They transition not from man to woman, but from one deception to another, from one sin to another, from one attitude to another.

The answer is to surrender. Fully. Gloriously. Give Jesus leadership and refuse to seek after fulfillment in any way other than him. The love you experience will answer every question.

This spirit of entitlement convinces us to look inward and fight for our perceived rights. After all, we have a right to be whoever we want, right? We can express it in most any way we desire, according to today’s cultural standard. This attitude is fueled by pride that results in the pursuit of personal attention, gain and satisfaction.

Isaiah 14:12–15: How are you fallen from heaven, O Lucifer, son of the morning! How are you cut down to the ground, which did weaken the nations! For you have said in your heart, I will ascend into heaven, I will exalt my throne above the stars of God: I will sit also upon the mount of the congregation, in the sides of the north: I will ascend above the heights of the clouds; I will be like the most High. Yet you shall be brought down to hell, to the sides of the pit.

Because of Lucifer’s attitude, millions of people have been destroyed, the Holocaust terrorized a generation, an ancient flood destroyed the masses, 55 million American babies have been murdered and Hell is growing in size to hold the increasing number of people who will live there for eternity.

Yes, a spirit of entitlement destroys.

Proverbs 16:18: Pride goes before destruction, and a haughty spirit before a fall.

Proverbs 11:2: When pride comes, then comes shame: but with the lowly is wisdom.

Proverbs 18:12: Before destruction the heart of man is haughty, and before honor is humility.

It’s easy to rally around one who’s operating in a spirit of entitlement, especially if they are pursuing a self-defining, self-satisfying identity that can be related to. People will champion another’s perceived rights if it means their own pursuits will be strengthened by it. The unity around false human rights is resulting in increased confusion, radical rebellion and an anti-Christ spirit growing in power in our culture.

Again, the answer is to surrender to Jesus. We need a move of God like no other time in history.

It absolutely breaks my heart that Bruce Jenner and others have seen no clear remedy to their many human struggles, fears, sins and disturbances. Where is the victorious church? They can’t find the power. They can’t imagine what deliverance would feel like. This, church, is on us.

John 1:12 (KJV) 12 But as many as received him, to them gave he power to become the sons of God, even to them that believe on his name:

John 10:10 (ESV) 10 The thief comes only to steal and kill and destroy. I came that they may have life and have it abundantly.

I once met someone who had quite a testimony. He was born a male and then underwent a complete sex change operation. After living as a woman he met Jesus—and made the decision to live in his permanently altered “female” body as a man, just as God created him. That man is a champion. That man should be celebrated for his bravery to die to self and surrender all.

There is always hope when Jesus is involved.

Bruce will never be a female. He can, however, be a son of God. Let’s believe together that he is touched by the unmistakable power of the Holy Spirit and falls in deeply love with him. His confusion will be replaced with clarity and his old man will make way for the new. What a mighty celebration we will have the moment that happens!