These are words we never want to hear God say…DO NOT PRAY. 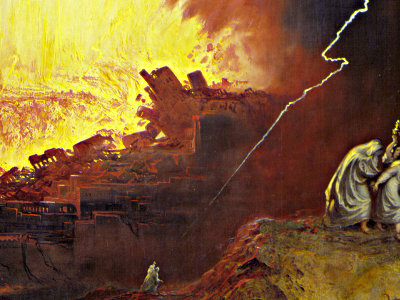 It’s common to hear evangelists encourage lost people wandering in the darkness of hopelessness by saying, “It’s never too late.”

While it is true that anybody who desires to surrender their lives to the love and leadership of Jesus will be welcomed with open arms, it’s not true that it’s never too late. If we want to return to God now, it’s because the Holy Spirit is drawing us. There can come a time where our rejection of God will be respected, and the drawing will cease.

I’ve taught previously on the very interesting and troubling topic of a great delusion. Due to repeated wickedness, there comes a time when people are given over a debased mind, to a delusion:

9 The coming of the lawless one is by the activity of Satan with all power and false signs and wonders, 10 and with all wicked deception for those who are perishing, because they refused to love the truth and so be saved. 11 Therefore God sends them a strong delusion, so that they may believe what is false, 12 in order that all may be condemned who did not believe the truth but had pleasure in unrighteousness. 2 Thessalonians 2:9-12 (ESV)

And since they did not see fit to acknowledge God, God gave them up to a debased mind to do what ought not to be done. Romans 1:28 (ESV)

Isaiah was commissioned to prophesy this very thing—that eyes would be blinded to truth.

8 And I heard the voice of the Lord saying, “Whom shall I send, and who will go for us?” Then I said, “Here I am! Send me.” 9 And he said, “Go, and say to this people: “‘Keep on hearing, but do not understand; keep on seeing, but do not perceive.’ 10 Make the heart of this people dull, and their ears heavy, and blind their eyes; lest they see with their eyes, and hear with their ears, and understand with their hearts, and turn and be healed.” 11 Then I said, “How long, O Lord?” And he said: “Until cities lie waste without inhabitant, and houses without people, and the land is a desolate waste, Isaiah 6:8-11 (ESV)

How strange (and troubling) it is that God would do this. In his wisdom, he opens and closes the window of opportunity for people to come to him.

Most often we presume people have until the day they die to turn to the Lord. This isn’t the case. There are many who have been turned over to delusion. Eyes have been blinded. Others have committed the unforgivable sin of blasphemy of the Holy Spirit. It’s too late.

Many are nearing the point of no return, and for a significant number of them it will come well before they die. They will be spiritually hopeless, fully dead, possibly decades before an obituary is written.

This is a terrifying reality, and it should increase our urgency for intercession and evangelism.

Of course, only God knows who has crossed this line, and our job is to continue to contend for all. Additionally, we know that at other points in the book of Isaiah we see him prophesying eyes that see and ears that hear.

6 “I am the LORD; I have called you in righteousness; I will take you by the hand and keep you; I will give you as a covenant for the people, a light for the nations, 7 to open the eyes that are blind, to bring out the prisoners from the dungeon, from the prison those who sit in darkness. Isaiah 42:6-7 (ESV)

The reality remains, however, that many eyes will forever be closed, many people forever imprisoned in delusion.

DO NOT PRAY FOR THE WELFARE OF THIS PEOPLE

There can come a time personally when we cannot return to Jesus.

There can also come a time when a nation cannot return—until its people endure everything necessary to bring them to repentance.

Thus says the LORD concerning this people: “They have loved to wander thus; they have not restrained their feet; therefore the LORD does not accept them; now he will remember their iniquity and punish their sins.” Jeremiah 14:10 (ESV)

The weight of this verse is almost too much to bear—and God meant for it to be that heavy. He declared in no uncertain terms that he does not accept them. He will remember their iniquity and he will punish their sins. It would seem to be the perfect moment for a prayer movement to launch, for a cry of intercession to shatter the heavens. Unfortunately, it’s too late.

11 The LORD said to me: “Do not pray for the welfare of this people. 12 Though they fast, I will not hear their cry, and though they offer burnt offering and grain offering, I will not accept them. But I will consume them by the sword, by famine, and by pestilence.” Jeremiah 14:11-12 (ESV)

From the Adam Clarke Commentary:

O, how dreadful is the state of that people in reference to whom the Lord says to his ministers, Pray not for them; or, what amounts nearly to a prohibition, withholds from his ministers the spirit of prayer and intercession in behalf of the people!

Can you imagine, intercessors, gathering together with every intent to contend for our nation, when God then clearly reveals that we are forbidden to pray. It will do no good. His mind is made up.

I know some of you might be thinking about Abraham’s negotiations with God as he interceded fervently for Sodom and Gomorrah even as God was intent on destroying them. Can we not do the same if God reveals his plans for judgment on a nation? For those who are truly compassionate, they won’t be able to help but to wrestle with God. With tears in our eyes we would have no choice but to cry out for mercy. Sadly, in this account, it would have done no good. The clear command was that prayer was not to be made.

In a spiritual culture like we have today, the common reaction to such a topic would be that God, in his perfect love, is smiling over the people and is ready to receive them back. The idea of God standing in opposition to those he so deeply loves runs counter to much of the faulty theology that’s rampant today.

This scenario plays out as we continue in Jeremiah 14. Read this passage completely. The message is very clear:

13 Then I said: “Ah, Lord GOD, behold, the prophets say to them, ‘You shall not see the sword, nor shall you have famine, but I will give you assured peace in this place.’” 14 And the LORD said to me: “The prophets are prophesying lies in my name. I did not send them, nor did I command them or speak to them. They are prophesying to you a lying vision, worthless divination, and the deceit of their own minds. 15 Therefore thus says the LORD concerning the prophets who prophesy in my name although I did not send them, and who say, ‘Sword and famine shall not come upon this land’: By sword and famine those prophets shall be consumed. 16 And the people to whom they prophesy shall be cast out in the streets of Jerusalem, victims of famine and sword, with none to bury them—them, their wives, their sons, and their daughters. For I will pour out their evil upon them. Jeremiah 14:13-16 (ESV)

There are those who will reject truth for the sake of keeping people hopeful and happy. These lying prophets are everywhere today, and they will only increase, especially if our nation ever gets to the point that the people in this story did.

Adam Clarke explains the above passage (and the following verses in the account) well:

God declares to Jeremiah that not even Moses and Samuel, whose prayers had been so prevalent, could divert him from his purpose of punishing so wicked a people, v. 1. Accordingly their captivity is again announced in a variety of images so full of terror, vv. 2-9, that the prophet complains of his own hard fate in being obliged to deliver such unwelcome messages, v. 10; for which too he is reproved, vv. 11-14. Immediately he appeals to God for his sincerity, and supplicates pardon, vv. 15-18; and God tempers his reproof with promising again to protect him in the faithful discharge of his duty.

America is not at this point of no return—yet.

There are movements of holiness, revival and passionate, devoted intercession growing from coast to coast. Awakening is happening.

However, I don’t believe these movements are currently strong or numerous enough to outpace the movement of wickedness that’s both in the world and in the church today.

What this means is that the window of opportunity is quickly closing and if we don’t exponentially increase our efforts, judgment very certainly will come to us.

If judgment does come to America, I believe God will preserve the remnant, radically devoted church as he promised to Jeremiah and as he did at Goshen with the Israelites.

This isn’t a time for fear as God’s own will be protected (though this doesn’t mean hardship or persecution won’t come). This is a time to be marked by tears, just as Jeremiah was.

Oh that my head were waters, and my eyes a fountain of tears, that I might weep day and night for the slain of the daughter of my people! Jeremiah 9:1 (ESV)

Don’t listen to the lying prophets who are saying that all is well and no judgment will come.

Do rend your hearts.

Do contend for revival.

Do pray, while there is time, before God tells us that we can pray for our nation no more.