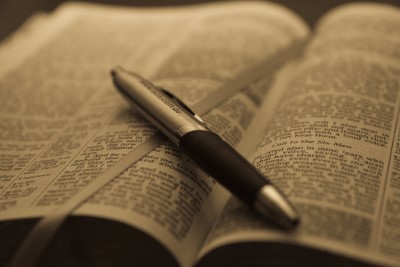 The power of God manifesting in the church is rare today.

The state of the world demands legitimate, other-worldly invasion of Holy Spirit power. Revival. I'm not talking about the controversial gifts of the Spirit or the unusual manifestations that are common in some churches today. I'm referring to God's undeniable power moving through congregations first and then ultimately to the nation and the rest of the world. Revival.

There is a sharp, supernatural anointing that must rest on preaching today.

Repentance, transformation and deliverance from all sorts of bondages are desperately needed.

Instead, we see churches that major on encouraging talks, social connections and principles for successful living.

Several years ago I was challenged to write an alternate version of Acts chapter two that sadly mirrors much of church as we know it. Instead of carrying on about how much we need God to move again, I'll allow the translation to speak for itself.

It shouldn't be necessary to qualify, but I will. This is satire. But, as is often true with satire, the similarities between what you are about to read and what we are seeing in the church today are shocking.

I'd like to challenge you. After you read it, read the actual, legitimate version and note the stark differences. Friends, we must have an Acts two revival in America again.

Disclosure: Not an accurate translation

The First Seeker Church is Born

Acts 2:1-47 (SSV) 1 When the day of fellowship arrived, they were all together in one place. 2 And suddenly there came from the espresso machine a sound like a mighty rushing wind, and the aroma of ground, organic coffee beans filled the entire house where they were sitting. 3 And the warmth of friendship touched each one of them. 4 And they were all appreciative of the Holy Spirit and began to speak about the challenges of life as their human spirit gave them utterance. 5 Now there were dwelling in the nation religious people, devout men from every nation under heaven. 6 And at this sound the multitude came together, and they were bewildered, because each one was hearing them speak about the same life issues as they had. 7 And they were amazed and astonished, saying, “Are not all these who are speaking church goers? 8 And how is it that we hear them talking about the same things we talk about? 9 Chicago and Los Angeles and South Carolina and residents of Dallas, Denver and Orlando, Kansas City and Paris, 10 London and Amsterdam, Switzerland and the parts of Tijuana belonging to Mexico, and visitors from Australia, 11 both church goers and seekers, Americans and Europeans—we hear them asking in our own words their questions about God.” 12 And all were amazed and perplexed, saying to one another, “What does this mean?” 13 But others mocking said, “They have had way too much coffee.” 14 But Peter, standing with the eleven, lifted up his voice and addressed them: “Men of America and all who dwell in Detroit, let this be known to you, and give ear to my words. 15 For these people are not over-caffeinated, as you suppose, since the coffee bar has only been open a short time. 16 But this is what was uttered through the story teller and great motivator Joel: 17 “‘And in the last days it shall be, God declares, that I will encourage human wisdom to be poured out, and your sons and your daughters shall share relevant stories, and your young men shall create media presentations, and your old men shall not get in the way; 18 even on my guys and gals in those days I will give them new fashion sense, and they shall be hipsters. 19 And I will show wonders in the heavens above and signs on the earth below, light shows, and pyrotechnics, and smoke machines; 20 Sunday School stories will be told about the sun turning to darkness and the moon to blood, before the day of the Lord comes, the hard to believe, but great and magnificent day. 21 And it shall come to pass that the mention of salvation will be subtle and culturally relevant.’ 22 “Men of America, hear these words: Jesus of Nazareth, a man attested to you by God with mighty human difficulties that he overcame, as you yourselves know— 23 this Jesus, delivered up according to the definite plan and foreknowledge of God, happily traded his life for yours. 24 God raised him up, as you have witnessed in your Easter stage productions. 25 For David says concerning him, “‘I saw the Lord always before me, with great encouraging principles to help me stay strong; 26 therefore I was thrilled and really happy; my flesh also will dwell in hope. 27 For you, we don’t want to talk too much about Hell, which shouldn’t be a concern. 28 You have made known to me the six step plan for a happier life; you will make me full of gladness with your principles of victorious living.’ 29 “Brothers, I may say to you with confidence about the old guy David that he both died and was buried, and his tomb is with us to this day. 30 Being therefore a great motivator, and knowing that God promised that he would set someone in his family in his position, 31 he foresaw and spoke about the suspenseful drama of Jesus, and because of this you can be happy. 32 This Jesus God really appreciates, just like he appreciates you. 33 Hanging out with his Dad, and having received from him awesome wisdom, he has poured this out that you yourselves are seeing and hearing. 34 For David couldn’t see into the heavens, but he himself says, “‘The Lord said to my Lord, “let’s hang out, 35 you have no more problems at all.”’ 36 Let all the Christians therefore know for certain that God has made him both Lord and Christ, this Jesus who traded his life for yours.” 37 Now when they heard this they were happily encouraged, and said to Peter and the rest of the apostles, “This is pretty cool, what shall we do?” 38 And Peter said to them, “Simply know that God appreciates you just like you are and, over time, you will slowly start walking the direction he walks, and you will receive the gift of understanding and awesome living. 39 For the promise is for you and for your children and for all who are far off, everyone whom the Lord our God calls to himself.” 40 And with many other words he bore witness and continued to exhort them, saying, “Make better choices than the others in this culture.” 41 So those who received his word received a free latte, and there were added that day about three thousand church attenders. 42 And they devoted themselves to the life coach’s stories and hanging out together, to the buffets and the low key talks about God. 43 And apathy came upon every soul, and no wonders or signs were being done through them. 44 And all who had questions were together and focused on happiness. 45 And they were buying new possessions and belongings and giving to social causes as they felt led. 46 And once or twice a month, listening to the leader’s stories together and watching football in their homes, they enjoyed eating, 47 thinking about God and being pretty much the same as all the other people in the world. And they added to their number day by day those who were being anesthetized.

Another Disclosure: This is really, really not an accurate translation. Thank God.

Photo credit: “Open Bible with pen Antique Grayscale” by Ryk Neethling is licensed under CC BY 2.0

Posted in Culture, The Church